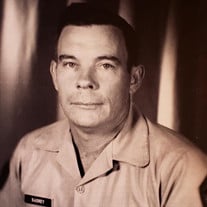 William “Bill” Donald Kasney (also known as the Honorary Mayor of Strathview) passed away peacefully in his home, surrounded by family, at the age of 90 on April 20th, 2022, in Medical Lake, WA. He was born in Medicine Lodge, KS to Joseph & Myrtle Kasney on September 2nd, 1931, the 2nd youngest of 10 children. Bill proudly served in the United States Air Force for 21 years, retiring in 1972 as a Senior Master Sergeant. He then worked as a Senior Electrician for the State of Washington at Lakeland Village for 17 years, retiring in 1991. His military career provided many traveling opportunities and adventures that Bill shared with his wife and children. They collected many items from around the world, each with a unique story, and were proudly displayed throughout their home for friends and family to enjoy. During and following his military and civilian service, Bill enjoyed taking his wife dancing, going fishing and taking long walks, working in his yard and garden, watching the Seattle Seahawks, Seattle Mariners, and Gonzaga Bulldogs, and spending time with family. He will be remembered for his great sense of humor and quick wit, he took pride in being a little bit ornery and thought of himself as 100% cowboy. Bill lived by and modeled the values of integrity, courage, and conviction. He was revered for being a dedicated family man and was respected for his drive to provide for them. He was greatly loved and will be truly missed. He is survived by his daughter, Leona Osborn, brothers Larry and Kenny, and sister Lula Mae, many grandchildren, great-grandchildren, nieces, nephews, and many family alike. He was preceded in death by his wife of 62 years, Dona Kasney (1931-2018) and 3 of their children, LaDona Gard (2006), Lance Kasney (2013), Billy Don Kasney (2022), sisters Helen (2018) and Melva (2021) and brothers Elmer (1921), James (1997), Howard (2004), and Jack (2009). A service will be held at The Church of Jesus Christ of Latter-Day Saints at 10405 W Melville Rd in Cheney, WA, on Saturday, May 14, 2022, at 1:00 PM. A separate, private military service will be held for the family. In lieu of flowers, please send donations to the Washington State Veterans Cemetery or Disabled American Veterans.

William &#8220;Bill&#8221; Donald Kasney (also known as the Honorary Mayor of Strathview) passed away peacefully in his home, surrounded by family, at the age of 90 on April 20th, 2022, in Medical Lake, WA. He was born in Medicine Lodge, KS... View Obituary & Service Information

The family of William Donald Kasney created this Life Tributes page to make it easy to share your memories.