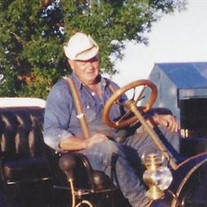 Gene Monroe Kaplan was born September 10, 1927 in Plaza, WA. He was a very proud, protective and private man. Farming was in his blood and he continued farming and ranching until his last days. Some of his happiest days were swathing the fields of “good” hay he raised as he was very particular on how it was put up. Each year he looked forward to the day that we could start his irrigation system. Just as he would be very insistent on how his cattle were taken care of and handled which he was rewarded by the Champion plaques he had from the carload sales at Stockland Livestock auction. Gene was also and outstanding mechanic who could fix most anything his daughter, Mary broke. He was able to machine parts if needed. At a local dance he met the love of his life, Margaret, whom he shared 58 years of marriage with. During those years they worked side by side to make the ranch succeed. When time allowed they also enjoyed fishing together. When they inherited the Chapman Lake property they also ran the resort together while Gene learned to hatch fish. One of his accomplishments was being able to hatch 150,000 Kokanee Silver trout each year for 9 years. Once Margaret was no longer able to be cared for at home Gene took up baking and cooking for himself and his precious dog, Dixie. He was proud of his kitchen skills, many times bragging about Dixie liking his cooking! Margaret passed away in 2012 but now they are truly “Together Forever”. Gene was a lifetime member of the Spokane Gun Club where he enjoyed shooting trap. He also enjoyed hunting when he could as he was known as a very good shot! During the winter months he enjoyed watching Gonzaga basketball, both mens and womens. If nothing else he would search for a cattle sale to watch on TV. One of his most precious accomplishments was restoring the Schacht car which he was able to share many rides in. He still had a few projects he wanted to complete but time didn't allow. Drafted into the Air Force where he proudly served. Once home he would also volunteer for the Spokane County Fire District 3 where he would respond with his dozer whenever they called. He served many years on the board of directors for Rosalia Producers. Gene and Margaret were lifetime supporters of the Spokane Jr Livestock Show. At Gene’s request a private burial was held where he was laid to rest along side Margaret. We would like to thank the outstanding caregivers and staff of Touchmark South hill Skilled Nursing for the dignity and care the gave to both Mom and Dad. Donations can be made to either Spokane County Fire District #3 or Spokane Junior Livestock show in his name.

Gene Monroe Kaplan was born September 10, 1927 in Plaza, WA. He was a very proud, protective and private man. Farming was in his blood and he continued farming and ranching until his last days. Some of his happiest days were swathing the fields... View Obituary & Service Information

The family of Gene Monroe Kaplan created this Life Tributes page to make it easy to share your memories.