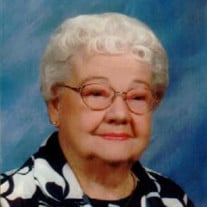 Mary Louise Ott of Cheney, WA, retired social worker and secretary, died peacefully in her home on December 23rd. She had made a miraculous recovery from a stroke in November thanks to the amazing loving care of the staff at Deaconess Medical Center, Cheney Care Center and Cheney Assisted Living. All that hard work wore her out and she then died of natural causes. MaryLu was born July 4, 1928 in Coeur’ d Alene, Idaho to Henry and Martha (James) Ott. She lived in CDA and attended school there until 1935 when the family moved to Clarkston, WA. She graduated from Holy Family Catholic School and Clarkston High. After graduation she worked at the telephone office until starting her family. A 1948 marriage to Thomas R. Polillo ended in 1968. In 1970 she received her Office Management and secretarial degree from LCSC and was hired as secretary to the Dean of Students. She married Leo Foster in August of 1972 and continued working in secretarial positions. In 1979, along with her husband, she co-managed the Nedry and Linden Court Apartments until 1990. In 1980 MaryLu was also hired as supervisor for “Senior Home Care” until her retirement in 1992. She enjoyed working with Seniors and continued even after retirement, until her own health needed her attention. In 1997 she moved to Post Falls, Idaho to be closer to family. She often said how much she loved the town, it’s friendly atmosphere and the Catholic Church. She felt like she had “come home”. She was an avid reader. She enjoyed visiting with her family and grandchildren, fishing, camping, touring, working in her flower and vegetable gardens, cooking and trying new recipes. Her sense of humor and ingenuity kept us all in stiches! She is preceded in death by her parents, one son, one brother and one sister. She is survived by three sons Richard Polillo of Spokane, WA, Ronald Polillo (Laura) of O’Fallon, IL, Stephen Polillo (Karla) of Bremerton, WA and daughter Martha Lauber (David) of Cheney, WA, ten grandchildren, seven great grandchildren and one on the way! Her family would like to thank the amazing staff at the Cheney Assisted Living. They are truly walking angels here on earth. Too many to name for fear of leaving someone out, they are all incredible! Some were careful to even make sure she had her TV on for football games and on the right channel for every single Gonzaga basketball game! (She was a very loyal fan). Per her wishes she will be cremated and her final resting place will be with her family. They will celebrate her life in a private ceremony at a later date. Memorials may be sent to St. Rose of Lima Catholic Church in Cheney, WA.

Mary Louise Ott of Cheney, WA, retired social worker and secretary, died peacefully in her home on December 23rd. She had made a miraculous recovery from a stroke in November thanks to the amazing loving care of the staff at Deaconess Medical... View Obituary & Service Information

The family of Mary Lu Ott created this Life Tributes page to make it easy to share your memories.