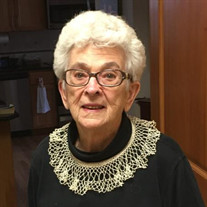 Mary H. Daugharty caught the train with her ancestors Friday Night April 8th at her home in Cheney Washington. Mary Daugharty's handshake tells you all about her. The over-the-top firm handshake comes from a 5'1" schoolteacher who grew up on a dairy farm in Clark Fork, ID. She bravely waited until she knew it was time to go. Mary was born in Butte, Montana on May 18, 1937, to Clint and Irene (Monahan) Henderson. As a child, her family moved to Clark Fork, Idaho to a dairy farm for the next 28 years. She met her husband David of nearly 70 years there, and they became a dynamic team as they traveled to far-off places around the world. Their boys marveled at Mary’s ability to float a dry fly into a back eddy for trout or shoot, dress, and quarter a large game animal. She studied the natural environment and could name most flora and fauna in the Pacific Northwest. They settled in Deary, Idaho as Dave started his teaching profession and Mary became a mother extraordinaire to Tim and Scott. They made exceptional friends in Deary and never forgot their roots to this special community. A transitional year in southern Idaho led to the wonderful community of Cheney, Washington for the last 57 years. Mary received her teaching degree at Eastern Washington State College in 1968. Her career and colleagues at Betz, Windsor, and Reid laboratory school were highlights in her life. She ended her career by becoming a consultant in teaching mathematics to elementary teachers throughout the west. Mary was an inspiration to all as she championed a can-do attitude in any endeavor she pursued. She touched hundreds of students, inspired colleagues, and led educational talks and seminars. Mary had many great experiences with teaching at the Laboratory School and teaching English majors at Tver State University in the Soviet Union. Mary was a tireless protector of the people who had a scarcity of resources, emotional isolation or are minority populations. A master sewer, quilter, knitter, chef, fundraiser, and community organizer, she continued to serve in Spokane County for 50 plus years. Mary and her like-minded tribe of doers, secured prom dresses for homeless girls, raised money for musical instruments for public school children, knitted pairs of slippers yearly for battered women's shelters, handed out free books to families at the Spokane Christmas Bureau, and defended Planned Parenthood from "all enemies foreign, and domestic." Mary leaves Dave, Tim, Kim, Piper, Quinn, Scott, Patty, Conor, Katie, and scores of family and friends to catch a later train. A Celebration of Mary Daugharty will be held on April 23, 2022, at 11:00 am at the District #3 Firehall, 10 S Presley Dr. Cheney, WA 99004. Come share memories, laughs, cheers, music, and food in celebration of the intrepid Mary. A private family burial of her ashes on the Henderson farm is planned in Clark Fork, Idaho this summer. In lieu of flowers, it is suggested donations be made to Planned Parenthood in Mary’s name. Cremation was performed by Cheney Funeral Chapel.

Mary H. Daugharty caught the train with her ancestors Friday Night April 8th at her home in Cheney Washington. Mary Daugharty's handshake tells you all about her. The over-the-top firm handshake comes from a 5'1" schoolteacher who grew up on... View Obituary & Service Information

The family of Mary H Daugharty created this Life Tributes page to make it easy to share your memories.

Mary H. Daugharty caught the train with her ancestors Friday...