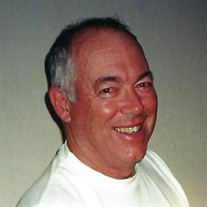 Lyle Raymond Bruce passed away on December 31, 2021, at the age of 79, in Spokane, Washington. He left this world suddenly, but we can rest assured knowing that the “Spud King” is now in heaven tending to God’s glorious potatoes. Lyle was born to Lawrence and Violet Bruce on May 28, 1942. He grew up in the small town of Farmington, Washington. He went to school in Farmington through 8th grade. He attended Oaksdale High School where he was a member of the baseball team. He remained good friends with many of his high school classmates and always enjoyed opportunities to catch up with them. Lyle attended Eastern Washington College – now University. He then transferred to Washington State University to finish out his college years and was a proud Cougar graduate and loyal Cougar fan. Going to dances was a favorite pastime in those days. It was on one of these evenings that Lyle caught the eye of the lovely Robin Babb at a dance in the Plaza, Washington, Grange Hall. They married on June 6th, 1964. The couple settled in Spokane where their daughter, Shannon, was born in 1965. Shortly after, they moved to Kalispell, MT for a brief time and then returned to the Palouse to settle in Farmington in 1966. Their son, John, was born three years later in the Spring turned Winter of 1969. The family lived in Farmington until 1978. Lyle decided that he wanted to try his hand at a different type of farming. He began raising certified seed potatoes among the many acres of wheat in the area. Growing potatoes in the climate of the Palouse was not an easy task and there were many tough years in the beginning as he was learning the industry. Lyle’s hard work, persistence, and eternal optimism paid off. In 1978, he moved the family to Post Falls. The climate on the Rathdrum Prairie proved to be much better for certified seed potatoes and Lyle became a highly successful potato farmer. In 1996, he made the cover of Potato Grower Magazine and was given the title, Spud King. Lyle and Robin lived in Post Falls from 1978 – 2018. They enjoyed traveling and spent time visiting many states in our country. Some of their favorite locations to visit included the East Coast, several trips to Hawaii, and many stays in Florida. They also loved vacationing in St. Martin in the Caribbean. They traveled there many times and made close friends along the way. After Lyle retired, they moved back to his wife’s childhood farm outside of Cheney, Washington, and have enjoyed the quiet life these last few years. Lyle was a devoted husband and wonderful father and grandfather. There was never a problem that he couldn’t solve or find a way around. His smile, optimistic nature, and kind spirit were a tribute to the man that he was. There was not a person that knew him that did not love him. Lyle is survived by his wife, Robin; daughter, Shannon (Don) Drum, Meridian, ID; son, John (Alexa) Bruce, Spokane, WA; seven grandchildren; two great-grandchildren, and two more on the way. He is also survived by his three sisters, Norma Lee Johnson, Yakima, WA; Janet (Brian) Ladyman, Spokane, WA; and Beverly Babbitt, Liberty Lake, WA. Lyle is preceded in death by his parents, Lawrence and Violet Bruce. A Memorial service will be held on Tuesday, January 11th at 11:00 AM at the Cheney Funeral Chapel (https://www.cheneyfuneral.com/). Please join us for a reception following the service at the same location. Burial will follow the reception at the Fairview Cemetery on Salnave Road in Cheney. In lieu of flowers, donations can be made in Lyle’s name to the Union Gospel Mission in Spokane (https://www.uniongospelmission.org/donate).

Lyle Raymond Bruce passed away on December 31, 2021, at the age of 79, in Spokane, Washington. He left this world suddenly, but we can rest assured knowing that the &#8220;Spud King&#8221; is now in heaven tending to God&#8217;s glorious potatoes.... View Obituary & Service Information

The family of Lyle Raymond Bruce created this Life Tributes page to make it easy to share your memories.