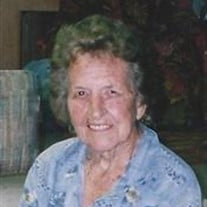 KATHERINE L. ANDERSON (age 100) Of Cheney Washington passed away November 27, 2013. She was born July 16, 1913 in Renton, Washington, the eldest of eleven children. She grew up on the Lund Dairy Farm on Cow Creek in Benge, Washington. Katherine completed her two year teaching certificate at Cheney Normal school, and her B.A. at Eastern Washington college. She married Cecil Anderson June 4, 1934 in Newport, Washington where they ran Kelly's Tavern and cut wood for a living during the depression years. She taught at schools in Mt. Spokane, Hooper and Sunnyside before moving to the Cramer farm they purchased in Cheney in 1946. Katherine plumbed the old Cramer house so they would have running water and an inside bathroom. Upon learning 5 year old daughter Sharon was deaf, Katherine drove Sharon to Davis School for the Hearing Impaired in Spokane every day and became the school secretary. After urging by the Principal, Edna Davis, and a Davis School Parent Scholarship, Katherine and her family traveled to San Francisco where she completed her M.Ed. in Deaf Education in one year. She taught at Davis school until she retired. No stranger to hard work, Katherine helped Cecil milk 60 cows morning and night while teaching before they went to beef cattle. Katherine raised big vegetable gardens, baked 30 apple pies to freeze every fall and made chocolate cake from scratch, which was a favorite of the grandchildren and everyone who stopped to visit. She had the prettiest yard with every kind of flower which filled her spare moments with weeding. She fixed fences, helped build barns, built her own new house and helped Homer remodel trailers. She cared for her aging mother, brother and husband in her home until they passed away. Katherine and Cecil purchased land at Warden in the newly opened Columbia Basin Irrigation District where they lived in a tent, cleared tumble weeds, and broke new ground to grow their own alfalfa to support their dairy and beef cattle. Cecil passed away January of 1987, Katherine continued living on the farm at Cheney until her death. She is survived by her sister; Margaret Fleming of Kirkland, WA. Children; Robert Anderson (Luann), Sharon Corbit, and Joan Dickerson (Homer). Grandchildren; Vic and Cecil Anderson (Shereen), Adam Corbit (Jill), Dana Dickerson, Lisa Graese (Kevin), Tina Teal (Tolman), and Great Grandchildren; Chad and Victoria Anderson, Raeann and Jake Anderson, Cody Corbit, Athena Dickerson, Ethan and Pamela Graese, and Chance and Lane Teal. Special caregivers and friends; Brook Burdick, Diane Fitzner and Kit Just. Katherine was preceded in death by brothers; Otto, Vic, George, Ralph and Andrew (Sonny) and sisters; Irene, Edna, Eleanor and Carol. Katherine led a happy, caring, hard working, productive life. She helped many and was respected and loved by all. At her request, no public service was held. A private burial attended by family was held on November 29, at Spokane Memorial Gardens.

KATHERINE L. ANDERSON (age 100) Of Cheney Washington passed away November 27, 2013. She was born July 16, 1913 in Renton, Washington, the eldest of eleven children. She grew up on the Lund Dairy Farm on Cow Creek in Benge, Washington. Katherine... View Obituary & Service Information

The family of Katherine L Anderson created this Life Tributes page to make it easy to share your memories.