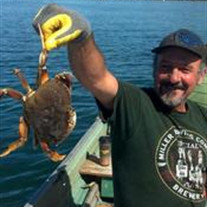 Ernest Henry Gilmour Jr. was born in Whittier CA on February 4th in 1958 to proud parents, Ernest H. Gilmour Sr. and Marie J. Zabel. Ernie moved with his family to Cheney, WA in 1967. Ernie graduated from Cheney High School in 1976. He is survived by his parents and his two wonderful children, a son named, Shawn A. Gilmour and a beautiful daughter named Kristy M. Gilmour, and a granddaughter named Lily M. Gilmour. Ernie also had a very special, significant other, of over eight wonderful years to Jackie Robbins of Old Town Newport, Idaho, and her four children. Ernie is also survived by his brother, William B. Gilmour; and two sisters, Nadine M. Madrazo and Laura Siegmund. Ernie lived and worked in the Newport, WA area, as a business partner with his long-time girlfriend Jackie Robbins in Robbins Tree Removal Service. Ernie was a big-hearted, quiet and honest man with much humility. Ernie only once in his brother’s memory talked about his passion in life. Ernie’s passion in life was climbing trees, so in the end Ernie died doing what he loved most. Ernie when asked “What’s up? or “How are you doing?” Always responded with, “Still Kicking”, and when asked “What are you doing?” always responded with “Still killing Trees”. Ernie is known and loved by many people in the community, because he would give young people a job when jobs are scarce. If Ernie’s apprentice would stay with him long enough, Ernie would teach them everything he knew about climbing trees and dangerous tree removal. Ultimately, Ernie gave many young people a chance to learn a trade and be able to support themselves and their families when no one else would. He wanted to give them a chance to try, and be a positive and productive part of society. For fun, Ernie had lots of it with his boat during the summers on the Pond Oreille River giving kids and adults inner tube rides until they could take no more, or casual cruises with friends and family up to the eagle’s nest or down to Cancun beach to party on the sand. Summers also included a trip to Oregon for the annual family reunion and the Oregon coast to crab and fish. In Newport, he often met friends at the ”Rio” to play pool, tell tall stories, and bring the usually dangerous day to a close. Ernie, we are all so sad that your life was cut short at the age of; a very young 55. There has been and will be so many more tears shed in your honor and in your memory. Although most of the tears shed today will be of sadness, we will think of all the happiness and joy you have created throughout your life to help and to be a positive influence in so many lives. We will miss you so dearly and hope you are at peace; you will truly be missed and thought of every day. Love from everyone whose life you have ever touched. A memorial service will be held at 1:00 p.m. on Saturday, October 19, at Cheney Funeral Chapel, 1632 W. First St., Cheney WA.

The family of Ernest H. Gilmour, Jr. created this Life Tributes page to make it easy to share your memories.