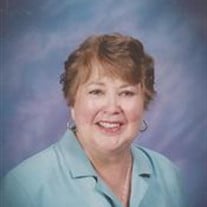 Barbara Ann (Pitts) Parrett went to be with the Lord on Oct 10, 2011. She was the second of four daughters born to Earl and Bernadetta Pitts. She was born in Wallace, Idaho on September 2, 1932. The family moved from Spokane to Chelan, Washington, when her father bought into an International Harvester. Barbara graduated from Chelan High School in 1950. She was Apple Blossom Princess for Chelan that year. She graduated from Kinman Business University in Spokane and worked as a secretary, later getting her Insurance Agent license and worked for a number of years in Spokane. She also worked in the fruit industry when she lived in Chelan. Barbara and Howard Parrett were married in August of 1982 in Spokane, WA. She and Howard have lived in the Cheney area since 2006. They came from East Wenatchee where they resided for six years to be with family and help care for Barbara’s mother. Before moving to East Wenatchee they lived in Spokane for many years. Golf and bridge were two of her favorite hobbies over the years. She also enjoyed cooking and reading. The love of her home and family was her highest priority of life. Their miniature Schnauzer, named, Mozart, was her and Howard’s delight. She is survived by her husband, Howard Parrett. A daughter Terisa Lund of Gold Bar, Wash, and Grandson Canyon Sotiropoulas of San Francisco, CA. Son, Todd Lund and daughter-in-law, Lea Anne and granddaughter, Taylon of Coeur d’alene, Idaho. Stepson Larry Parrett and step daughter Denise of Seattle, Washington. Three step grandchildren, Chase, Reese and Sara. She, has three sisters; Alice Carpenter of Tyler, Texas, Erleyne Jackson of Chelan, Wash and Vicki Kottas of Lewistown, Mont.; as well as many nieces and nephews. There will be no service per Barbara’s request. Any memorials in her name can be made to the Shriners Hospital for Children, PO Box 2472, Spokane, WA 99210. She will be dearly missed for her compassion, generous and caring love she shared with us all.

Barbara Ann (Pitts) Parrett went to be with the Lord on Oct 10, 2011. She was the second of four daughters born to Earl and Bernadetta Pitts. She was born in Wallace, Idaho on September 2, 1932. The family moved from Spokane to Chelan, Washington,... View Obituary & Service Information

The family of Barbara Ann Parrett created this Life Tributes page to make it easy to share your memories.