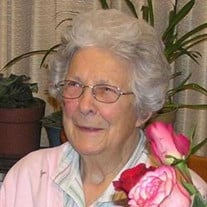 Zoora Jean MacCheyne, 93, passed away peacefully in the home she shared with her daughter Nancy Curry in Cheney, Washington, on Saturday, March 26, 2016. Jean was born on January 23, 1923 in Ephrata, Washington, to John and Anna (Woolman) MacCheyne, the sixth of eight siblings and half-siblings. She attended elementary schools in Ephrata and Stratford, Washington, and attended high school in Two Harbors, Minnesota, where she lived with her mother's sister Grace Hanson and family. Returning to Washington State after graduation, Jean attended business school in Spokane and later worked at the Ephrata Air Base and at Boeing in Seattle, and taught business typing in Coupeville, Washington. Jean married Wilmar Loren Curry, her childhood sweetheart from Stratford, Washington, in Oakland, California, on Christmas Day, 1947. Beginning their married life in California, Jean and Loren eventually returned to Washington State with their four children and settled in the Puget Sound area, retiring to Wilson Creek, Washington in 1990.After Jean graduated magna cum laude from the University of Washington in 1964, with a degree in Health Education, she taught school in Marysville, Washington, and other locations in Snohomish County for many years. Health was always her very great passion. Following Loren's death, Jean married Ernest E. Draves in Wilson Creek in 1993, acquiring a loved step-family. After living in Wilson Creek for a while, Jean and Ernest moved to the town of her birth, Ephrata, where they resided until Ernest's death. Jean was preceded in death by both her husbands, Loren and Ernest; her parents; her sisters Margaret Eubank, Georgia Brown, Iva Green, Irene O'Toole, Phyllis Underwood, and Ruth Jessop; and her brother Robert MacCheyne. Jean leaves behind her children, Marianne (Joseph) Bodine of Monroe City, MO; William (Helen) Curry of Marrowstone Island, WA; Robert Curry of West Linn, OR; and Nancy Curry of Cheney, WA; nine grandchildren, Donovan Curry of Seattle, WA; Jessica Curry of Portland, OR: Cameron (Allison) Curry of Alamogordo, NM; Dorian Curry of Cheney, WA; Laurel Bodine of Quincy, IL; Zorina Curry of Seattle, WA; Genevieve Curry of South Burlington, VT; Loren Curry of West Linn, OR; and Rosaletta Curry of London, England; three great-grandchildren, Charlotte and Juliette Curry of Alamogordo, NM, and Ukiah Curry of Vashon Island, WA; and many dearly beloved nieces and nephews. Jean enjoyed her extended family very much, and was delighted to visit with so many of them in the weeks preceding her death. It brought a smile to her face and a twinkle to her pretty blue eyes to see them. A memorial service will be held at the cemetery in Wilson Creek, Washington on June 22 at 11:00 a.m., when Jean's ashes will be interred next to her husband Loren. Mom – my mind still talks with you, my heart still looks for you, my soul knows you are at peace.

Zoora Jean MacCheyne, 93, passed away peacefully in the home she shared with her daughter Nancy Curry in Cheney, Washington, on Saturday, March 26, 2016. Jean was born on January 23, 1923 in Ephrata, Washington, to John and Anna (Woolman) MacCheyne,... View Obituary & Service Information

The family of Zoora Jean MacCheyne created this Life Tributes page to make it easy to share your memories.

Zoora Jean MacCheyne, 93, passed away peacefully in the home...