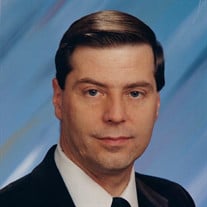 William “Bill” E. Turlington, III, 63, of Cheney, WA, peacefully passed away on March 29, 2017, surrounded by his loving family. Bill was born on October 2, 1953, in Cheektowaga, NY, to William E. Turlington, Jr., and Betty F. Turlington. At the age of 3, Bill became an older brother to Donald R. Turlington. His youngest brother, Daniel R. Turlington, was born when Bill was 6. As a young man, Bill enjoyed trains, Boy Scouts, and anything electronic. Entering the United States Air Force in 1971, Bill proudly served 8 years. Marrying MaryAnne Turlington on January 17, 1979, the pair recently celebrated their 38thwedding anniversary. Preferring the Plymouth brand, Bill began his love of cars by owning a Duster, a Sebring Plus, and a Dodge Dart. He gladly gave up his muscle cars to take care of and make memories with his growing family. Bill cherished his children, Ronald W. Turlington (41) and Amanda R. Turlington (38). Since 1998, he also served as a loving father figure to his granddaughter, Kayli R. Turlington. Working for NCR for 17 years, he then joined the IT Department at Eastern Washington University where he was a dedicated employee until his death. Bighearted, Bill was known to perform selfless acts of kindness to everyone in his life. Everyone who met him became a friend to Bill. Cherishing animals throughout his life, his bond with his pug, Pogo, led to a lifelong friendship with the volunteer staff at Higher Ground Animal Sanctuary. He is proceeded in death by his parents, his Uncle Jack, several loving friends, and Pogo. Bill is lovingly remembered by his wife, son, daughter, 2 brothers, and grandchildren he adored, Kayli R. Turlington, Trinity R. Turlington, and Connor W. Turlington. Beloved friends are many, including Tim and Terri Palumbo who were by Bill’s side until the end. A memorial service will be held on Monday, April 3rd at the Washington State Veterans Cemetery, 21702 W Espanola Rd, Medical Lake, WA 99022. In lieu of flowers, contributions can be made in Memory of Bill: Cheri Scandales Higher Ground Animal Sanctuary 16602 N. Day Mt. Spokane Rd Mead, WA 99021

The family of William Edward Turlington III created this Life Tributes page to make it easy to share your memories.