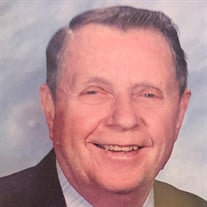 William Mark Dutton was born 8/15/1932 and lived 89 good years until 9/16/2021. Dad was born in Seattle, raised in Bothell, and moved to Issaquah where he graduated with a great group of lifelong friends, Roy (Rosie) Gallagher, Ken (Marion) Hampton, Jerry (Ginny) Noon, and Dale Stydell. He lived in Hawaii with Len, his first wife, and Cindy, his first daughter, while in the Navy. They returned to Seattle where he graduated from the University of Washington. During this time he and Len had three more children: Rebecca, Diane, and Joyce. He worked for Boeing as an electrical engineer for over 30 years with some people he counted as great lifelong friends. As a family, we enjoyed many vacations to Lake Chelan and the ocean. Body surfing in 35-degree water until our fingernails turned purple was a favorite activity. He also made the best pancakes over the campfire on the cast iron griddle. He remarried in 1989 to Irene and shortly after that became a strong believer in Jesus. They lived in Enumclaw at his long dreamed for farm, then at Hood Canal, and finally in Buckley. They attended two churches in the Auburn/Enumclaw area where they developed many close friendships. They also enjoyed traveling, dancing, and playing cards until Irene's passing in 2011. More recently, he was in assisted living and finally retired in Spokane. He was preceded in death by his parents, Claude and Christine Dutton - Bothell pioneers, his brother Jim Dutton, his wife Irene Dutton, and her son Stuart Zydek. He is survived by his first wife Len Dutton, children Cindy Dutton, Rebecca (Ken) Biallis, Diane (Ken) Raines, and Joyce McAuliffe; grandchildren, Grace and Sarah Johnson, Hayley, and Carley McAuliffe, and Heather and Finn Raines; sisters-in-law Jane (Ervin) Herness, Jean Stohr and their children; stepsons Stephen (Margaret) and Scott Zydek, Stuart’s wife Pam and son Zachary as well as his cousins Shirley (Bob) and Cheri Minch. Relationships were high on Bill’s life priorities list, so we say thank you for being his friends and good neighbors. He will be missed by all! A private family service was held at the Bothell Cemetery. Please consider making a donation to the Alzheimer's Association in his name.

William Mark Dutton was born 8/15/1932 and lived 89 good years until 9/16/2021. Dad was born in Seattle, raised in Bothell, and moved to Issaquah where he graduated with a great group of lifelong friends, Roy (Rosie) Gallagher, Ken (Marion)... View Obituary & Service Information

The family of William Mark Dutton created this Life Tributes page to make it easy to share your memories.