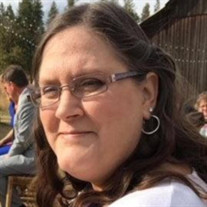 Tammi Renee Anderson Bailey May 24, 1971 — September 9, 2021 Tammi Renee Anderson Bailey was born to Lowell and Eileen Anderson on May 24, 1971. On September 9, 2021, at 50 years old in Spokane, Washington, Tammi left this world and ran into the arms of Jesus. Tammi was very tenderhearted, loved her stuffed animals as a child, and never met a stranger. She was always a champion for those who were hurting. She had an infectious smile and she would always ask about you and how you were doing no matter what was going on in her life. Tammi graduated from Walla Walla High School in 1989 and then attended Northwest College in Kirkland, Washington. Her first job was at Purple Parasol in Walla Walla during high school. After her children were born she became a pharmacy technician-A beginning her career at The Medicine Shoppe here in Walla Walla with two of her favorite people, Ron and Jill Becker. Tammi lived for her family. Her greatest joy was her children and husband. She was happiest holding and playing, with not only her children, but all the children in the family. She provided daycare for several of her nieces and nephews when they were young. Another very important part of Tammi’s life was her local church. Over the years, she has ministered in kid’s ministries in her church from Nursery age through Middle School leaving an imprint on many lives. Tammi was the youngest of four children. She is survived by her mother, Eileen Anderson Davis (Buddy); her husband, Steven Bailey; her children, Chris (Holly), Rebecca and Reagan; three grandchildren, Reuben, Arianna and Roman; sisters, Brenda May (Tim), David Mark Anderson (Dina), Terri McMakin (Tom) and Jerry Anderson (DeDe); as well as 11 nieces and nephews, and seven grand nieces and nephews. Tammi is preceded by her father, Lowell Anderson; and brother, Ricky Anderson. Tammi’s family is comforted knowing that she is running and playing with all of the children in heaven. They also are at peace that she is no longer in pain and is in the presence of Jesus.

The family of Tammi Renee Bailey created this Life Tributes page to make it easy to share your memories.