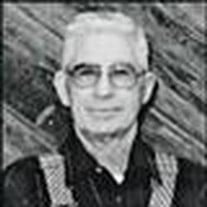 Ronald, of Cheney, Washington, passed away December 1, 2016. Ronald was born to Frederick and Ida (Showalter) McKinley on February 19, 1935, in Cheney, WA. They lived and farmed on the Moss-Miller Ranch in Northern Whitman Co. He is a grandson of the late George W. and Mabel (Box) Showalter who homesteaded in the Tyler area in 1894. Fred and Ida purchased Milton Showalter's farm in 1950 and moved to Amber. Ron attended Amber School until Amber High School consolidated with Cheney in 1949. Ron then attended Cheney High School and graduated in 1954. He continued to work on the farm while attending Eastern Washington University part-time. He married Patricia (Pierce) on March 17, 1957, near Lancaster, WA, at the Pierce home. They were married 59 1/2 years. Ron served his community in many ways. He was a Volunteer Firefighter for 58 years for Spokane Co. District #3. He was a Fire Commissioner for Spokane Co. District #3 for 18 of those years. Ron was Fire Fighter of the Year in 1993 and again in 1999. Ron was a member of Temple Lodge #42 in Cheney for 50+ years and was a Past Worshipful Master and served as Secretary for 37 years. He received the Prestigious Hiram Award and was also a member of #310 Eastern Washington Lodge of Research. He was a 50+ member of Martha Chapter #60, Order of Eastern Star. Ron was a member of Amber Grange and then Tyler Grange for over 50 years. He also was a member of Spokane Co. Cattlemen, WA Cattlemen's Association, and WA Wheat Growers Association. Ron served his country as a member of the Washington State Army National Guard. He is survived by his wife, Pat; son, Michael (Genevieve); daughter, Brenda (Larry) Andrew; sister Lois (Ben) Merrill; two sisters-in-law, Jane (Pierce) Marsh and Bev (Pierce) Davis; granddaughters, Kalen (Jameson) Ault, Erin (Bert) Carlstrom, Lauren McKinley; grandsons Ethan and Shane Andrew, and many cousins, nieces, nephews, and numerous friends. A memorial service will be held at 11:30 a.m. on December 19, 2016, at Fire District #3, 10 S. Presley, Cheney, WA. In lieu of flowers, donations may be made to Hospice of Spokane, PO Box 2215, Spokane, WA 99210-2215 or Lance Hill Cemetery Association, c/o Ron Mill, 22206 W. Pine Springs Rd., Cheney, WA 99004.

Ronald, of Cheney, Washington, passed away December 1, 2016. Ronald was born to Frederick and Ida (Showalter) McKinley on February 19, 1935, in Cheney, WA. They lived and farmed on the Moss-Miller Ranch in Northern Whitman Co. He is a grandson... View Obituary & Service Information

The family of Ronald Nelson McKinley created this Life Tributes page to make it easy to share your memories.