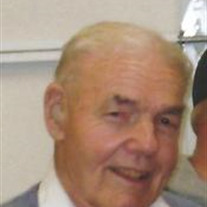 Richard D. Simpson (age 84) Lifetime Lincoln county resident and farmer, passed away February 25, 2012 in Pullman, Washington. Dick was born September 26, 1927 in Reardan, Washington to Hale and Blanche (Brown) Simpson and was a graduate of Edwall High School, class of 1945. He married his wife of 62 yrs, Margaret Hopkins of Opportunity, Washington on February 5, 1950. Together they farmed, operated Dicks Welding and raised their three children. Mr. Simpson was a member of the Edwall Grain Growers. He enjoyed his family, dogs, hunting and fishing and will be remembered as an extraordinarily generous, shy, jovial, humble and tenderhearted man. He is survived by his wife, Margaret Simpson of Pullman, Wa. Children; Jerry Simpson and his wife Jo of Pendlton, OR., Clark Simpson of Fairbanks, AK and Carol Robinson and her husband Ken of Moscow, ID. Grandchildren; Jared Simpson, Lorissa vonWolfradt, Jenelle Simpson, Jennifer Larson, Brenda Hansen and Scott Robinson. Great grandchildren; Sam, Riley, Alynn and Shelby. Memorial contributions may be made to the Reardan Presbyterian Church or the charity of choice in his memory. Visitation will be 3-5 p.m. on Sunday at the funeral home. A graveside service will be held at 9:30 on Monday, March 5, at the Edwall cemetery followed by a memorial service at 11:00 a.m. at the Reardan Presbyterian Church. A reception will follow.

The family of Richard D. Simpson created this Life Tributes page to make it easy to share your memories.