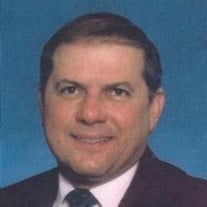 On October 25, 2016, the City of Deer Park, WA lost a prominent member of the community when Ralph E. Lauer Jr. passed away peacefully asleep in his home. Ralph owned and operated the Lauer Funeral Home in Deer Park, WA. He was well respected as a professional Funeral Director, Embalmer and Small Business Owner in the Inland Empire since 1962. His unexpected passing was a shock to the family, his friends and the Deer Park, WA community. Ralph was born on January 8, 1942, the second of five children of Ralph Edward Lauer Sr. and Adah Genevieve Dunham. He was the only male sibling and was older than his twin sister, Nannette Jeanneret, by fifteen minutes. He was a native of Deer Park, WA, where he graduated from Deer Park High School in 1960. Ralph attended California Mortuary School in Los Angeles, CA and returned to Deer Park, WA in 1962 as a licensed Embalmer and Funeral Director. He married his longtime girlfriend Frances Louise Peacock in 1966 and they were married 49 years. Frances preceded him in death on February 14, 2016. They had known each other since the 8th grade! Determined to attain a University degree, Ralph graduated with a Bachelor of Science in Political Science from the University of Washington in 1968. In the same year he was commissioned as an Ensign in the U.S. Navy and his first child, AnnaLisa, was born. The U.S. Navy transferred Ralph from Seattle to San Diego and he served three tours to Vietnam from 1968 until 1974. His second child, R. Edward was born in 1972. Ralph completed his Juris Doctorate (J.D.) from the California School of Law in 1977 and he continued to serve his country as an Armor Officer in the California Army National Guard. Ralph returned to Deer Park to run the family business, when is mother passed away in 1982. He took pride in his profession, business, life and lived by the Mission of the Lauer Funeral Home: To serve the living with grace and respect; to serve the dying with dignity and honor; to serve the community with trust and confidence; and to be proud of our profession, family and selves. His business vision, mission and philanthropy allowed the Lauer Funeral Home to service approximately 100 families a year. Ralph not only provided for his family, he loved to tell stories to anyone who would listen. He was often seen supporting Masonic events throughout the region. Ralph was a 52- year member and Past Master of Boyer Mountain Masonic Lodge #134 F&AM, a member of Spokane Valley Scottish Rite, El Katif Shrine, President of the South Spokane Shrine Club in 1998 and a Jester. He was passionate about assisting those who needed help and he referred over 10 children for surgery to the Spokane Shriner’s Hospital for Crippled Children. God was equally important in his life. He was a member of the Open Door Congregational Church in Deer Park for over 70 years. Ralph is survived by his two children: AnnaLisa Lauer-Hansing and R. Edward Lauer III, his three grandchildren: Richard James “R.J.” Hansing, Matthew Edward Hansing and Naomi Adrianna Lauer and his four sisters: MaryKay Meili, Nannette Jeanneret, Patsy Casco and Candace Foti. Service will be held November 12th, 2016 at 11:00 a.m.at the St. Mary’s Presentation Parish in Deer Park, WA; followed with reception at the Parish Social Hall and internment at Greenwood Memorial in Spokane, WA. Memorial contributions may be mailed to the Shriner’s Hospital for Crippled Children-Spokane at 911 W. 5th Avenue, Spokane, WA 99204.

On October 25, 2016, the City of Deer Park, WA lost a prominent member of the community when Ralph E. Lauer Jr. passed away peacefully asleep in his home. Ralph owned and operated the Lauer Funeral Home in Deer Park, WA. He was well respected... View Obituary & Service Information

The family of Ralph E. Lauer, Jr. created this Life Tributes page to make it easy to share your memories.