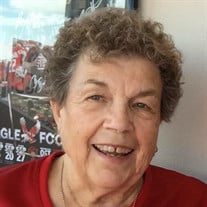 Neva Louise (Goller) Lincoln passed away on February 13, 2022, with her husband and children by her side. Neva was born on September 6, 1933, to Walter and Myrtle (Eignor) Goller at her Aunt Della’s house in Kimberly, Idaho. She was the seventh of nine siblings. Neva was raised on the family farm in Wendell, Idaho, and graduated from Wendell High School in 1951. Neva moved with her parents to Boise, Idaho where she attended Boise Junior College and worked for the Idaho Statehouse, Motor Carrier Division. In Boise, Neva met a young airman, (Robert) Bob Lincoln, and they were married on September 8, 1957, and celebrated 64 years of marriage in 2021. Neva and Bob had three children – Cathy, Caren, and Dirk. They travelled from Mountain Home Air Force Base in Idaho to Sembach Air Force Base in Germany, ending up at Fairchild Air Force Base in Washington. They ultimately settled in Cheney, Washington in 1974. Neva was a stay-at-home Mom while her children were growing up but decided to take care of the neighbor’s children for a year. That year led her to care for even more children, which led to a long career as an in-home daycare provider. Over the years “Lincoln”, which is what all the kids called her, lovingly cared for so many children for over 25 years until her retirement in 2002. Upon retirement, Neva started volunteering in the office at the Cheney United Methodist Church until 2020. Despite not being able to work in the church office due to COVID-19, Neva continued her ministry to the homebound members by sending monthly bulletins and cards. Neva was involved with P.E.O. Chapter IQ and enjoyed attending Eastern Washington University athletic events with her family. Neva was preceded in death by her parents, Walter and Myrtle Goller; brothers, Kenneth Goller, Wilbur Goller, and Jim Goller; and sisters, Elizabeth Windsor, Dorothy Von Weller, Annie Higginbotham, and Doris Scates. She is survived by her husband, Bob Lincoln; daughters, Cathy (Jim) Almekinder and Caren Lincoln; son, Dirk (Violet) Lincoln; grandchildren, Kyle Almekinder, Daniel Almekinder, Carter Lincoln, and Sydney Lincoln; sister, Eleanor Clark of North Carolina; and brother-in-law, Charles (Joyce) Lincoln of Missouri. Her family meant everything to her, and she loved her husband, children, and grandchildren with all her heart. She will truly be missed. A memorial service will be held on Saturday, March 19, 2022, at the Cheney United Methodist Church, 204 4th Street, Cheney, Washington at 2:00 pm. For those unable to attend, a recording of the service will be available a few days later on the Cheney UMC YouTube channel. To view, visit www.youtube.com, search for “Cheney UMC”, and select the Neva Lincoln Celebration of Life video. A private interment ceremony will be held at the Spokane Veteran’s Memorial Cemetery. In lieu of flowers, the family requests memorial donations be made in Neva’s memory to the Cheney United Methodist Church or Turnbull National Wildlife Refuge.

Neva Louise (Goller) Lincoln passed away on February 13, 2022, with her husband and children by her side. Neva was born on September 6, 1933, to Walter and Myrtle (Eignor) Goller at her Aunt Della&#8217;s house in Kimberly, Idaho. She was... View Obituary & Service Information

The family of Neva Louise Lincoln created this Life Tributes page to make it easy to share your memories.