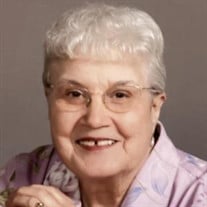 Margaret Kauffman passed away November 23, 2021, from complications of Amyotrophic Lateral Sclerosis (ALS) at the age of 82. Margaret was born Margaret Mary Aichlmayr on August 12, 1939, to Mary and Otto Aichlmayr in Cottonwood, ID, the youngest of 11 children. Otto passed when Margaret was seven, and Mary remarried Max Haider. The family moved to Lewiston, ID, where Margaret graduated from Lewiston High School in 1957. She met Lester L. Kauffman and the couple married on October 3, 1959. They had two children, Leslie Ann and Lester Lee, Jr. The family lived in Lewiston and Clarkston for several years after the children were born. After a brief move to Snelling, CA, they relocated to Spokane, WA in 1967. Margaret worked as a retail clerk for Payless and Skaggs drugstores and Safeway at Shadle Shopping Center. She retired from Safeway as the deli manager of the store at Third and Maple. Les passed away in 2011 and Margaret remarried Clayton Kauffman in 2013. They were married until his passing in 2020. Margaret was diagnosed with ALS in 2019. When the disease became too difficult to manage, she moved to Plaza, WA to live with her daughter, Leslie. Margaret always felt very blessed to have such a large family, nothing was more important. She will forever be remembered by her daughter, Leslie Peterschick, and son, Lester (Pamela) Kauffman, Jr.; grandchildren, Ashley (Drew) English, Michelle (Matt) Argyropoulos, Kristina (Tye) Knebel, Ryan, Joseph, and Maxwell Kauffman; great-grandchildren, Luke English and Kam Knebel; brother, Gregg Aichlmayr; step-granddaughter, Michelle (Shawn) McVey; and many nieces and nephews. Margaret is preceded in death by husbands, Les and Clay; siblings, Joseph, Mary, William, Elizabeth, Ann, Martha, Frederick, Norbert, and Hubert; and son-in-law, Dee Peterschick. A funeral mass will be held on December 10th at 2:00 pm at the Cathedral of Our Lady of Lourdes, 1115 W Riverside Avenue, Spokane WA. In lieu of flowers, please consider a donation in her honor to ALS Service Organization (ALSSO) or Matt's Place Foundation. A Facebook Livestream by the church can be found at https://www.facebook.com/OLLCathedral/videos/233552005528101

Margaret Kauffman passed away November 23, 2021, from complications of Amyotrophic Lateral Sclerosis (ALS) at the age of 82. Margaret was born Margaret Mary Aichlmayr on August 12, 1939, to Mary and Otto Aichlmayr in Cottonwood, ID, the youngest... View Obituary & Service Information

The family of Margaret Mary Kauffman created this Life Tributes page to make it easy to share your memories.