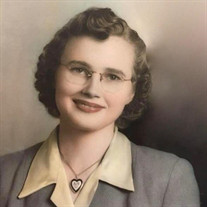 Lorraine E. (Dirks) Shawgo was born on the family farm near Lamont, WA on August 3, 1927, to Jake and Louise (Borth) Dirks and passed away on October 29, 2019, at River Mountain Village, Newport, WA due to complications from Alzheimer's related dementia. Her family was by her side, holding her hands. Growing up, she was active in track, baseball, and other sports, earning several ribbons and always loving the adventure. She also played the French horn and piano in high school. Lorraine worked hard on the family farm, affected by the depression years which influenced her choices throughout life. She was very close to her siblings, Helen, Clinton, and Clarence Dirks. She graduated from Lamont High School in 1946 and married Emmett Shawgo on September 7, 1946, at the Hitching Post in Coeur d'Alene, ID. They lived on the family farm near Ewan their entire lives and were married over 64 years when Emmett passed in 2010. Lorraine loved farm life and worked hard, helping with the chores, driving wheat truck and cooking for many hired men during harvest. Family was the most important to her with her chickens second on her list. She talked about them often. She enjoyed sewing, quilting, crocheting, crafts, and her large garden which she shared with family, friends, and neighbors. She expressed her love with food, inviting many to her table, even salesman that stopped by. She baked homemade bread and pies every Saturday and store-bought bread was a rare treat. For many years, she was the substitute cook for the Ewan and Lamont School Districts. When asked what her dream job would be, she said, “Cooking for the homeless.” She was the most selfless person we have ever known, always thinking of others before herself. Lorraine loved to travel with their motorhome and enjoyed cruises with family. A week-long trip to Nashville for the Country Music Festival with her daughter was a highlight of her life. She joined the Ewan Neighbor's Club in 1946 and was their treasurer for many years. She also taught Sunday School for 13 years at Ewan Nazarene Church and was a life-long member of the Washington State Grange and Eaton Grange of Ewan. She is survived by her children and their spouses, Wayne (Renee') of Newport, WA; Arlene (Tim) Stromberger of Davenport, WA; Roger (Jeanine) of Newport, WA; three grandchildren, Dave (Eileen) Stromberger of Cheney, WA, Marty Stromberger of Spokane, WA, and Steve (Hollie) Stromberger of San Tan Valley, AZ, four great-grandchildren, A.J., Grace, Hallie, and Timmy Stromberger; four step-grandchildren and six step-great-grandchildren, and her sister, Helen Jordan of Cheney, WA. The family would like to thank all of her amazing caregivers. At her request, a simple graveside service will be held at Spokane Memorial Gardens at 2:00 pm on Tuesday, November 5, 2019, with a reception following at The Marketplace in Cheney, WA. Pastor Janine Goodrich officiating. If desired, donations in her memory may be made to her favorite charity, Union Gospel Mission, 1224 E. Trent, Spokane, WA.

Lorraine E. (Dirks) Shawgo was born on the family farm near Lamont, WA on August 3, 1927, to Jake and Louise (Borth) Dirks and passed away on October 29, 2019, at River Mountain Village, Newport, WA due to complications from Alzheimer's related... View Obituary & Service Information

The family of Lorraine E. Shawgo created this Life Tributes page to make it easy to share your memories.

Lorraine E. (Dirks) Shawgo was born on the family farm near Lamont,...