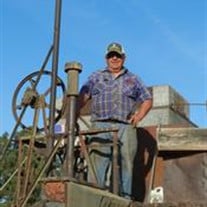 Larry DeGon passed away June 9th 2013 in Spokane, WA. He was born in Spokane to Francis and Flora DeGon on December 10th, 1942. He attended Spangle School and was in the first class to graduate from Liberty High School in 1961. After high school he worked for various farmers until 1964. At this time he was drafted into the Army to serve in Vietnam. He returned home in 1966 and went to work for M&M Chemicals, Inc. In 1968 he was hired by the Spokane County Road Department and after 28 years, he retired to fully engage in his passion for farming and ranching. He was a lifetime resident of the Spangle Community. Larry was active in his community and was a member of the Spangle Service Club for 52 years, the Spangle Cemetery Board for 35 years, Masonic Lodge 131, El Katif Shrine, Scottish Rite, and Liberty Livestock Supporters. Shorty enjoyed many other activities including collecting vintage equipment, old pick-ups, and a lot of “treasures”. He also enjoyed fishing, visiting with anyone, farming, raising cattle, and haying so his grandkids knew how to work. Camping with his family, attending his grandkids sporting events, and watching them show their livestock projects were some of his most treasured times. Shorty had a contagious laugh and smile that will never be forgotten. He is survived by his wife of 46 years, Kathy of Spangle, WA; children, Sandy (Rick) Mumby of Spangle, Laurie (Scott) Roecks of Rosalia, David (Amy) DeGon of Fairfield, and Chrissy DeGon of Spangle; grandchildren, Brian and Emily Mumby, Aly and Ashley Roecks, Kyle and Matthew DeGon, and Chance DeGon; brother, Jack DeGon of Yuma, AZ; sisters, Yvonne Rose of Tacoma, WA and Betty Smith of Spangle, WA; numerous nieces and nephews, and extended family. He was preceded in death by his parents and brother, Frank, and sister, Dorothy Jacobsen. A graveside memorial service will be held Friday, June 14th, 10:00 AM at the Spangle Cemetery. To accommodate parking there will be buses to shuttle you from the Harvester parking lot and Spangle Service Club to the cemetery. Please join us for a celebration of Shorty’s life at the Spangle Service Club following the service. In lieu of flowers, because of Shorty’s love for his community, the family suggests donations be made to the Spangle Service Club Flag Fund, Liberty Livestock Supporters, or Spangle Cemetery. Any donation may be sent c/o DeGon Family, PO Box 8243, Spokane, WA 99203. He will be greatly missed by his family and many friends.

Larry DeGon passed away June 9th 2013 in Spokane, WA. He was born in Spokane to Francis and Flora DeGon on December 10th, 1942. He attended Spangle School and was in the first class to graduate from Liberty High School in 1961. After high school... View Obituary & Service Information

The family of Lawrence G DeGon created this Life Tributes page to make it easy to share your memories.