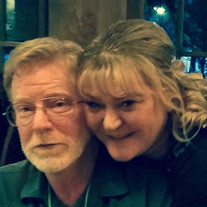 Kimberly (Kim) Regina (Gainer) Hartman passed away on Feb. 17, 2018 at 50 years old. Kim was a long-time resident of Cheney since junior high school. She passed away at a young age in her home to be with our Lord. Kim was born on Feb. 25, 1967 in Yuma, Ariz. and her parents were Clark Gainer and Clara (Marcoux) Gainer (1943-2012). She had two older brothers, Allan Gainer, past Cheney Mayor and Tim Gainer, both will tell you she was daddy's little girl. She married Michael Hartman on Feb. 16, 2008 in Spokane and they just celebrated their 10th wedding anniversary. With Michael, she got to travel and experience many adventures with her husband. One such adventure was a childhood dream...to swim with the dolphins. Both her and Michael owned Eagles Pub and developed many friends from their business. Kim was also a graduate of Eastern Washington University and she loved the Eagles. She used her degree to teach students at Apollo College. The one thing that made her happy besides being with Michael is all her children and grandchildren. If you asked her about her kids or grandkids, she would talk about all the great things they are doing. Family and friends were her passion. She loved to be around people. Many who would visit Eagle's Pub saw her smile as she greeted you when you walked in. Kim is survived by her kids from a previous marriage: Krystal (Norman) Sullivan, Justin Norman, Amber (Norman) Schertenleib and Dwight Norman. Also survived by adopted son, Anthony Hartman from her current marriage. She is also survived by her grandkids: Lily Norman, Zach Norman, Abby Stullivan, Trinity Sullivan, Harvey Sullivan, Ivy Norman, Jessiah Gerratt, Kylie Gerratt, Christopher Schertenleib, and Connor Schertenleib. Everyone resides in the Cheney-Spokane area. Services for Kim will be a closed ceremony for family and close friends, which will be announced at a later date. Her positive demeanor will be missed in our small community and by her family. Kim was loved by many, gave her all to make someone happy and was devoted to her family and friends.

Kimberly (Kim) Regina (Gainer) Hartman passed away on Feb. 17, 2018 at 50 years old. Kim was a long-time resident of Cheney since junior high school. She passed away at a young age in her home to be with our Lord. Kim was born on Feb. 25, 1967... View Obituary & Service Information

The family of Kimberly Regina Hartman created this Life Tributes page to make it easy to share your memories.