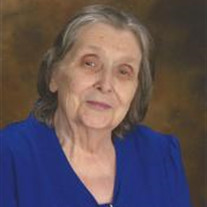 Joyce passed away unexpectedly but peacefully in her sleep February 17, 2013 at the age of 77.  She was born in Cashmere, Washington to Edward & Esther Hoff on June 12, 1935. She grew up in Marlin, Washington where she graduated in 1954.  She then moved to Spokane where she attended Kinman Business College.  After her dad passed away she moved back to Marlin.  She married Quentin (Smitty) Smith on August 6, 1956.  They moved to Spokane and then to Medical Lake where they raised five children on a dairy farm.  They later moved to Cheney to another dairy farm where her job was feeding the calves.  They later moved to Mt Vernon where they lived for 25 years before moving back to Cheney for the last seven years. When she was young, she wanted to learn to drive but after hitting the gas instead of the brake and going through a fence and breaking Smitty’s ribs, she decided it wasn’t for her.  Smitty must not have been too upset, he married her two years later.  She loved playing the piano that she learned playing by ear and everyone enjoyed listening to her, especially her children.  Her favorite thing to do was to write in her journals every day.  She had left behind many journals that her family will enjoy reading to help keep her memory alive.  She loved talking on the phone for hours to family and friends. She also loved being with family with friends and spending as much time with them as possible. She is survived by her husband Smitty of 56 years, five children: Angela Splonski (Paul) of Tyler, WA; Ray Smith of Bellingham, WA; Melissa Smith of Mt Vernon, WA; Mike Smith (Theresa) of Florence, AZ; and Jeff Smith of Mt Vernon, WA.  She also leaves behind six grandchildren: Mandy Smith, Michael Cross, Shannon Cross, Rodney Splonski, Shannon Copeland and Shaun Copeland and five great-grandchildren.  She was preceded in death by her brothers Darrell and Edward Hoff, Jr. and grandson Shane Splonski. She will be so greatly missed. A funeral Service will be held at 1:00 p.m. on Saturday, February 23, at Cheney Funeral Chapel, 1632 W. First St., Cheney WA.

Joyce passed away unexpectedly but peacefully in her sleep February 17, 2013 at the age of 77.  She was born in Cashmere, Washington to Edward & Esther Hoff on June 12, 1935. She grew up in Marlin, Washington where she graduated in 1954.  She... View Obituary & Service Information

The family of Joyce N. Smith created this Life Tributes page to make it easy to share your memories.

Joyce passed away unexpectedly but peacefully in her sleep February...