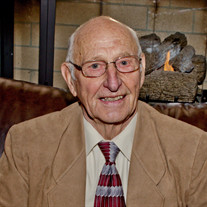 Gerald Klein was born on December 14, 1922 to Albert and Meta Klein on their farm in Edwall, Washington in the middle of a blizzard, assisted by a neighbor who was a midwife. Ethel, Marvin, and Marjorie were his three siblings. He grew up on the farm, in Edwall and in Blanchard, Idaho as his father moved to different jobs. His dad, Albert, lost his farm in Blanchard during the depression in 1932. Albert was able to lease and then buy the present farm from the bank and the family moved back to Edwall. Times were tough during these years but a strong family enabled them to get through. Family played an important part in Gerald’s life. There were many relatives on the Klein side and his mother was a Polenske, providing many more cousins. How many here today are related to Gerald? His grandparents emigrated from Germany the 1880’s, bringing a strong spiritual background with them, giving Gerald a good Christian heritage. He became a believer himself during Evangelistic meetings held by his Uncle Luther Plankenhorn in Edwall in 1933. Albert’s family and several others helped start Sprague Community Church in 1935. Graduating from Edwall High School in 1940, Gerald attended Whitworth College for two years. Because of World War II, his father then needed him to come home and help on the farm. While at Whitworth, he met Carol Gardner, who was his sister Marjorie’s roommate. Carol taught elementary school for a year in Yakima before they were married on June 9, 1945. They returned to farming with his father and lived on the Norman Buob place, where Roger and Russ were born, and the Loren Moos Place, where Marty was born. In 1948, Gerald and many others helped Albert build a new house. The old house was moved across the creek, fixed up and added onto. They moved into this house in 1953, just before Mark was born. Mark and Jan live there today. When his folks passed away in 1981, Gerald and Carol moved into Albert’s house. Gerald was involved in many of the activities in the area: Edwall Lion’s Club, Edwall Grain Growers board member, Edwall school board member, Sprague Grange board member, and Edwall Senior Citizens president. Gerald and Carol were 50+ year members of the Washington State Grange. He was Master of the Waukon Grange and Lincoln County Pomona Grange for many years. Gerald became a Scout Master for the Boy Scouts and all four of his boys became Eagle Scouts. The boys played all the sports in school with Dad attending most of the games. This continued on with his grandchildren and their games, and even to the great grandchildren. Their family’s spiritual life was very important to Gerald and Carol and they were very involved with Sprague Community Church. He was a board member, sang in the choir, taught Sunday School classes and led youth groups. He used his carpentry skills in helping build the church in 1946, a Sunday school addition in 1963, and showed up with hammer and advice in adding the fellowship room in 2009 at the age of 86. His sons, grandchildren, and great grandchildren continue to be involved in their local churches today. In 1987 Gerald retired from farming, with three of his sons continuing the family business. Gerald and Carol continued to travel worldwide. She was always ready to go and he gladly followed along. They enjoyed spending time with their family: at the lake, at their home pool, and at many family get-to-gethers. Carol passed away in 2007 and left a big hole in his heart. Neither one had wanted to be the one left behind. He filled his remaining years with church, garden, wood shop projects for his grandkids, and just spending time with his family. Roger and Mary Kaye moved in with him in November, 2016, helping him during the last years of his life. At the age of 97, Gerald passed away at home on January 31, 2020, going to his heavenly home to be with his Lord and his wife. Today we celebrate a life well-lived. Visitation will be Friday, February 7th from 5 -7 pm at Cheney Funeral Chapel, Cheney, WA. Graveside services will be Saturday, February 8th at 10 am at Greenwood Cemetery in Spokane, WA. A Memorial service will follow at 1:30 pm at Sprague Community Church in Sprague, WA. Memorial contributions may be made to Christian Heritage School, 48009 Ida Ave E, Edwall, WA 99008.

Gerald Klein was born on December 14, 1922 to Albert and Meta Klein on their farm in Edwall, Washington in the middle of a blizzard, assisted by a neighbor who was a midwife. Ethel, Marvin, and Marjorie were his three siblings. He grew up on... View Obituary & Service Information

The family of Gerald W. Klein created this Life Tributes page to make it easy to share your memories.