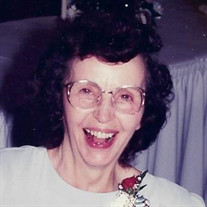 MILLER, Georgina (Nikotich) (Gina or Jean) 97 years Our beloved mom passed away peacefully in her sleep on January 16, 2018 at Hospice House of Spokane after a brief illness.  Gina, a 50 year resident of Cheney, WA, was born in 1920 in Spokane, WA to George and Anna Nikotich as the second of five children.  Growing up during the Great Depression mom learned the importance of getting an education, working hard and saving your money.  She graduated from Rogers High School in 1938 and worked at Kress Dime Store in Spokane.  With financial aid from her godfather, she attended Kelsey Baird Business School for training as a secretary, which she pursued as a lifelong career.  Gina worked for Bell Furniture in Spokane, where she met her soul mate, Michael Miller, one of the salesmen.  Soon they were engaged, but they thought they would wait until after World War II to wed. Ambitious Gina took the civil service exam and a position in Pasco, WA while Mike moved to Everett, WA for a new sales position.  When her boss in Pasco was transferred to The Presidio in San Francisco, CA he asked Gina to transfer too.  Courageously, she left her family and fiancé behind to pursue her career.  In July 1942 Mike visited Gina and they eloped in Reno, NV.  They settled in Everett for a short time.  In October 1942 Gina became a Navy wife as Mike enlisted for the war effort. While Mike trained they lived in Houston, TX and next she resided and worked in Norfolk, VA while Mike served. With the end of WWII they returned to Everett.  During a visit with family in Spokane, Gina observed Mike’s interest in his brother-in-law’s optometry textbooks.  She encouraged him to use his GI Bill benefit for further education.  They lived in the Wallingford neighborhood of Seattle while he took science courses at the University of Washington.  Gina was employed at Littler’s, a men’s clothing store, in downtown Seattle.  They moved to Chicago, IL for Mike’s optometry schooling in 1948.  Supporting them while he attended school she earned her Ph.T. (putting hubby through), as an employee of a major steel company.      Returning to Spokane in 1951 they opened Mike’s optometry practice in Cheney and started a family.  In 1952 Gina started her new career of being a mom which she did gracefully and with never ending love, having three children in four years.  The folks bought a home in Four Lakes, WA in 1956 and their fourth child joined the family later.  They moved to the Cheney home in 1967.     While raising her four kids with Mike, Gina was a member of Emmanuel Lutheran Church, Tilicum Club, Women’s Auxiliary Post #72, Lady Lions and Chapter AJ P.E.O.  Mom enjoyed flower gardening, cooking, reading non-fiction, and watching TV.  She encouraged Mike and the kids in all of their activities and education.  Each year our parents fostered a strong connection to our extended family through celebrations all year long.  Mom was amazing!     Returning to work in 1979 mom became dad’s secretary at his optometry practice.  They worked together for 28 years.  She semi-retired in 1992 and completely retired in 2007 at age 87.       In her retirement mom relaxed in the mornings with coffee and the Spokesman-Review.  Reading the newspaper and non-fiction books kept her mind going while her body slowed down.     Gina is preceded in death by Michael, husband of 64 years, soul mate for eternity, her parents George and Anna, brother and sister-in-law Sam and Ada Nikotich, sister and brother-in-law Sue and Mel Weipert, brother-in-law Neil Prior, sister and brother-in-law Ruby and Bob Wohrle.    Gina is survived by her four children Cindy (Graham), Olympia, WA, Steve, Cheney, Byron, Kennewick, WA and Carol, Cheney, her sister JoAnne Prior, Spokane, seventeen nieces and nephews and many more generations of nieces and nephews.  We thank Gina's physician Dr. Svetlana  Cox and the staff at Providence Internal Medicine for taking tender care of mom.  In her final days the staff at Hospice House South provided mom and us the comfort we needed, thank you all.    A Memorial service to celebrate Gina’s life will be in the spring.  In lieu of flowers memorials may be given to Emmanuel Lutheran Church 639 Elm Street, Cheney, WA 99004, Chapter AJ-P.E.O c/o P.O. Box 158, Cheney, WA 99004, Cheney Food Bank P.O. Box 614, Cheney, WA 99004 or Spokane Hospice House P.O. 2215, Spokane, WA 99210-2215.

MILLER, Georgina (Nikotich) (Gina or Jean) 97 years Our beloved mom passed away peacefully in her sleep on January 16, 2018 at Hospice House of Spokane after a brief illness.  Gina, a 50 year resident of Cheney, WA, was born in 1920 in Spokane,... View Obituary & Service Information

The family of Georgina Miller created this Life Tributes page to make it easy to share your memories.