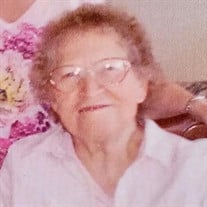 Genevieve passed away Tuesday morning, October 12th, in Spokane, WA. She was born to Mary Houska and William Masek in Valparaiso, Nebraska, on February 26, 1935. Genevieve graduated from Weston High School in 1951, received her teacher’s certification from the University of Nebraska, and taught in a 1-room schoolhouse for 3 years. Genevieve met her husband, Edwin, while he was in the Air Force and stationed in Lincoln, NE. They married in 1956 and moved back to his hometown, Hillside, NJ. Ed was a fireman for the township and Genevieve taught school, mostly elementary grades at nearby Catholic schools for several years. Genevieve and Ed had three children. She was a Girl Scout leader for 25 years and a Cub Scout den mother. The family enjoyed camping, as well, in their travel trailer and their annual vacation driving back to Nebraska. She played piano and was an excellent seamstress. Genevieve also worked as a bank teller for several years while the children were in high school and college. In 1985, Ed retired and the couple relocated to Medical Lake, WA. Genevieve was a lector, extraordinary minister, and member of the Altar Society at St. Anne Catholic Church. She ran the Koffee Kup Keglers bowling league in Cheney for 32 years and canned vegetables from their large garden. She was certified by the Library of Congress to type and read braille, transcribing books for the Lilac Foundation for the Blind. She became an avid quilter as a member of the Cheney Country Quilters and a hostess for the Washington State Quilters. She continued to be a dedicated sports fan, including annual trips to Omaha for the College World Series. Even after Ed passed away in 2005, Genevieve continued to be a loyal season ticket holder with the Spokane Chiefs hockey club (35 years), an active member of the Chiefs Booster Club, and a regular attendee at Spokane Indians baseball games. Genevieve is preceded in death by her husband Edwin Muench, parents William and Mary Masek, brother Leonard (Maxine) Masek, sister Grace (William) Carrier, brothers-in-law Ernest Cajka and Richard Hansen, and daughter-in-law Jill Muench. She is survived by son Brian Muench, daughters Cheryl (Dan) Moriarty and Kathleen (Tim) Brown; sisters Gladys Cajka and Georgianette (Gary) Downen; brother Lawrence (Shirley) Masek; cherished grandsons Tyler Muench and Brett Moriarty; and numerous nieces and nephews. Special thanks to Dr. Satinder Singh, his staff, and the staff of the Fresenius Kidney Center Spokane for their gracious care these last few years. A Rosary Vigil will be held on Friday, October 15th, at 6:30 pm at the Cheney Funeral Chapel. Mass of Christian Burial will be on Saturday, October 16th, at 10:00, am at St. Anne’s Catholic Church, Medical Lake, WA, followed by a Reception in the Church Hall and Interment at Holy Cross Cemetery at 1:00 p.m. In lieu of flowers, please consider a donation to Medical Lake Dollars for Scholars or the Spokane Chiefs Continuing Education Fund.

The family of Genevieve Lucille Muench created this Life Tributes page to make it easy to share your memories.