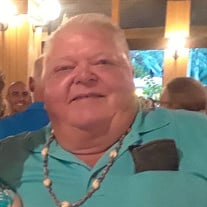 Bloom, Gene Emil, April 23, 1945 - August 18, 2019. Gene was born in Minot, ND to Vern & Alice Bloom. Gene grew up on a dairy farm outside of Garrison, ND with his older brother, Ron. He graduated from Garrison H.S in 1963. After graduation, Gene went to the North Dakota State School of Science, in Wahpeton, ND, where he graduated with a 2yr degree in Auto Mechanics. After that, he traveled to Cheney in 1966 and took a job at Brown and Holter Chevrolet garage where he met Shirley. They were married on November 1967. Gene took a job with Cheney Fire Department in 1969 where he rose to become captain and eventually fire Marshall. After 32 years of service to the city of Cheney, he retired in August of 2001. In retirement, Gene and Shirley enjoyed traveling in their motor home to Arizona in March and April each year.  They also enjoyed tailgating at EWU football games with many friends. Gene loved spending time with his family in the outdoors snowmobiling, camping, boating and golfing. He continued to keep his love of farming in his life by helping local farmers during harvest. Gene was always willing to lend a hand and give of himself to help others. He had a jovial sense of humor and was always in a jolly mood. Gene was a loving, patient and dedicated husband, as well as an extremely proud father and grandfather. He is survived by his brother Ron, his wife Shirley, son Darren, and granddaughters Emily and Elizabeth. A funeral service will be held at 1:00 p.m. on Thursday, August 22nd at the Cheney United Methodist Church, 204 4th Street, Cheney, WA 99004, followed by burial at Spokane-Cheney Memorial Gardens, 5909 Cheney Spokane Road, Spokane, WA 99224.

The family of Gene Emil Bloom created this Life Tributes page to make it easy to share your memories.