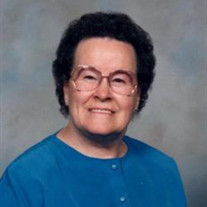 Ethyl Helen (Walker) VandeBerg was born March 26, 1914, to Bert and Louise Walker in Owen, Wisconsin. She joined a three-year-old sister, Violet, at the farm. She passed away, at home, on September 7, 2016 at the age of 102. Ethyl attended a rural, eight grade school and graduated from a small high school in Granton, Wisconson. From the age of eight, when she spent three weeks in the hospital recovering from surgery for a ruptured appendix, she wanted to be a nurse. However, 1932 was depression time, and the easiest thing to do was to go the County Normal School for a year and teach in the rural schools of the county. At the age of nineteen, she began teaching fifty children in eight grades about twenty miles from home. She often said that she learned more that first year than the children did. After nine years of teaching in rural schools, she married Loyd VandeBerg and went with him to Chicago, where he taught sailors at Navy Pier how to weld. During WWII, Ethyl worked as a file clerk and switchboard operator at a factory until Loyd entered the Air Force, and she was able to follow him to air bases in Texas and Louisiana. After the war, they both attended classes at Stout State University in Menomonie, Wisconsin. In 1947 Loyd accepted a position at EWU (then Eastern Washington State College) and they moved to Cheney. Ethyl completed her degree at Eastern and taught at Plaza, Washington for two years. During the next few years, Ethyl taught home economics at Eastern and kindergarten at the campus school. She also earned a Master’s of Education Degree from the University of Missouri. She taught kindergarten at Sprague, Washington until 1958 when her daughter, Janie, was adopted. She returned to kindergarten teaching in 1968, first at Betz and then at Salnave in Cheney, and retired in 1980. Athough Loyd remained a big part of her life, Ethyl and Loyd divorced in 1981. She continued to watch over him until his death in 2001. Ethyl was a 50+ year member of the Cheney United Methodist Church and was consistently active in the church; serving on various committees, participating at every conceivable event and ‘retiring’ from volunteer service in the church office at the age of 97. She was a also 50+ year member of the P.E.O. Sisterhood, first of Chapter AJ, then with chapters GA and IQ. In addition, a 50+ year member of the Order of Eastern Star, Martha Chapter, serving as Worthy Matron in 1970 and appointed to the state office of Grand Ruth in 1975. Throughout her life, Ethyl had many “grand adventures” including driving half-way across the U.S. when she was 87 and trips with her daughter to Europe & throughout the U.S. During the last few years of her life, she enjoyed knitting afghans for the church bazaar, playing with her “grand-puppy”, Maggie and listening to audio books & playing solitaire & angry birds on her Ipad. She will be greatly missed by her friends and family. She was preceded in death by her former husband, Loyd VandeBerg, her parents and two sisters. She is survived by daughters, Janie VandeBerg and Becky Reilly, her “grand-puppy”, Maggie, as well as many nieces, nephews, great nieces/nephews, great-great nieces/nephews, etc. A memorial service will be held at the United Methodist Church of Cheney at 10:00 a.m., Saturday, September 24th, 2016. Memorial contributions may be made to the United Methodist Church of Cheney.

Ethyl Helen (Walker) VandeBerg was born March 26, 1914, to Bert and Louise Walker in Owen, Wisconsin. She joined a three-year-old sister, Violet, at the farm. She passed away, at home, on September 7, 2016 at the age of 102. Ethyl attended... View Obituary & Service Information

The family of Ethyl Helen VandeBerg created this Life Tributes page to make it easy to share your memories.