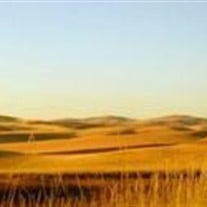 Our mother, Elizabeth Louise Andren Babb passed into the care of our Heavenly Father on July 18, 2012. Elizabeth was born on June 15, 1921 in Cheney, Washington. Her parents were George Leopold Andren and Vena Shonkwiler Andren. Elizabeth was their second daughter. Her older sister Catherine Andren Wileen and Elizabeth were two years apart in age and they were best friends and loving sisters throughout their lives. Shortly after Elizabeth’s birth the Andren family moved to Paha, Washington, where her father worked at the Centennial Mills grain elevators. Paha is now just a whisper of the community it was when our mother lived there and where Elizabeth spent the majority of her childhood years. Then Paha was a thriving farming community located on the mainline track of the Northern Pacific Railroad. Well into her old age our mother recalled some of her happiest moments in life while living in Paha. Her parents, George and Vena Andren, loved books and reading and Elizabeth remembers that her parents and her sister traveled over dirt roads to Ritzville, Washington, which was the location of the nearest library every week, where the whole Andren family checked out books, returning them the next week for more books. Our mother instilled in her children and grandchildren her lifelong love of reading and learning. The small town of Paha was very close-knit, and the friends Elizabeth met there remained her friends throughout their lives. Our mother was innately talented. As a little girl she performed at gatherings in and around Paha. She tap-danced by ear, and she played the piano by ear. She also sang. As an adult she taught herself to play the accordion and often performed at meetings of the East Cheney Grange where our parents were members for many years. At the age of four our mother read at an adult level. She skipped two grades in classes and graduated at the age of sixteen from Lewis and Clark High School in Spokane, Washington. Before that she went with her older sister to Seattle, Washington, because the sisters were inseparable and her older sister wanted to attend school in Seattle. Our mother attended school as well at Roosevelt High School in Seattle. Our mother then returned to Spokane where she became a nanny, cook, and housekeeper for room and board with the family of Stub Francis the original and longtime owner of “The Shack” restaurant in Spokane, Washington. Our mother took care of their toddler daughter, Robin, after whom I am named, when she was not attending school at Lewis and Clark. Elizabeth then attended the Eastern Washington College of Education (now EWU), where she majored in biology. During that time Elizabeth met the love of her life, our father, John Mason Babb. John farmed with his father, John Babb, Sr., on the family homestead southeast of Cheney. John and Elizabeth were married July 16, 1942 in Couer d’Alene, Idaho. They resided in a house on my grandfather’s farm, where my brother and I lived through most of our childhood. Our mother quit school during her junior year of college and became a full time partner in life with our father on the farm and as a mother to us. Their son, David John Babb was born October 9, 1943, and their daughter Robin Elizabeth Babb was born October 5, 1945. We were born during World War II and farmers like my father and my mother produced food for the war effort. Mom loved gardening and flowers and we were truly a self-sufficient farm, milking cows, raising cattle and hogs, and raising chickens and selling eggs. Mom churned our own butter for years and also passed milk through the cream separator twice a day, where excess cream was sold to the Cheney Creamery. Our house was always full of friends and relatives where we enjoyed simple activities like Canasta and Pinochle, or best of all, just listening to our elders tell stories of the “old days.” The best legacy our mother gave to us was to enjoy the simple pleasures of life, picnics in the pasture, and collecting the first buttercup in spring. Elizabeth was preceded in death by her husband, John, and her sister Catherine. Elizabeth is survived by her son, David and wife Kathleen, who still reside on the Babb homestead; and by her daughter Robin Babb Bruce, her husband Lyle, of Post Falls, Idaho; and her sister-in-law, Helen Babb Boots of Cheney. Elizabeth is also survived by three grandchildren and seven great-grandchildren, as well as loving cousins, nieces and nephews. Memorials may be given in our mother’s memory to the Spokane Human Society, P.O. Box 6247, Spokane, WA 99217 or the Shriners Hospital for Children, 911 W. 5th Ave., Spokane, WA 99204. A memorial service will be held Tuesday, July 24, 11:00 am at Cheney Funeral Chapel, Cheney, WA.

Our mother, Elizabeth Louise Andren Babb passed into the care of our Heavenly Father on July 18, 2012. Elizabeth was born on June 15, 1921 in Cheney, Washington. Her parents were George Leopold Andren and Vena Shonkwiler Andren. Elizabeth was... View Obituary & Service Information

The family of Elizabeth A. Babb created this Life Tributes page to make it easy to share your memories.

Our mother, Elizabeth Louise Andren Babb passed into the care...