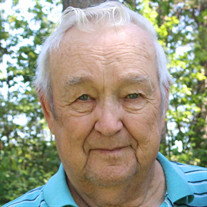 Donald “Dusty” Rhoades (81) passed away early on January 13, 2020, and is now reunited with his beloved wife Galen in heaven. He was born on June 9, 1938 in Tonasket, WA, second of twelve children born to his loving mother Josephine (Estell) Dickinson. He graduated from Spangle High School in 1957, where he met his best friend Jim, and they spent the next decades getting into mischief and cracking jokes together. Both were members of the Naval Air Reserve in high school, and joined the Marines right after graduation, serving over three years together. Donald met Galen “Peeps” (Reagan) Rhoades in Spokane, WA after he finished serving his three years in the Marines, and they were married shortly after on December 30, 1960. They enjoyed a happy marriage of nearly 59 years before Peeps passed away less than four months before him, presumably to warn everyone in Heaven that he (and his jokes) were coming. They welcomed the birth of four children: Shawn, Rickey, Michael, and Tammy. During their marriage, Donald and Galen lived in various places throughout Washington and Montana, eventually settling in the community of Spangle in later years. Donald served in the Marines for three years and the Air Force for over four years; worked and retired from construction as a member of the Laborer’s Union (including projects on the Boundary and Grand Coulee dams), and held various other jobs later in life when Galen decided he wasn’t quite ready for retirement. He was a hard worker, a proud Veteran, and a member of the Cheney American Legion and the Fraternal Order of Eagles. Dusty was a wonderful husband, father, grandfather, family member, and friend. He loved to laugh, especially while sharing stories and jokes at family gatherings, and he was always fun to be around. He was an avid reader, loved movies (especially Westerns), and enjoyed various hobbies over the years including playing Texas hold ‘em and cribbage, watching football games, horse races, working on cars, camping, fishing, hunting, and spoiling his well-loved cat Angel. Dusty had the best laugh, hugs, and kisses (accompanied by beard stubble on the cheek and a twinkle in his blue eyes). He loved his children and adored his grandchildren and great-grandchildren, and often shared his love with his witty and sarcastic humor. Donald was preceded in death by his beloved wife Galen Rhoades; his mother Josephine Dickinson; his mother-in-law Nedra Reagan; father-in-law Robert Reagan; his dearly loved aunt and uncle Phyllis and Walt Mundt; his brothers Jackie “Jake” Rhoades, Butch Dickinson, and Eugene “Gene” Dickinson; and his sister Charlotte Graham (Rhoades). He left behind a loving legacy with his family: siblings Linda Turley, Gary Dickinson (Sue), Dwayne Dickinson, Geraldine Sande (Earl), Terry Dickinson (Debbie), Velma Lindhag (Dan), and Thelma Teal (Don); his children Shawn Slater, Rickey Rhoades (Margie), Michael Rhoades, and Tammy Hinson (Joseph); his grandchildren Jessica (Hinson) Spracklen (John), Joseph Hinson (Chrisann), Megan Rhoades, Tyler Rhoades, Walter Slater III, Rosalyn Slater, Olivia Slater, and Vivien Rhoades; his great-grandchildren Johnny Spracklen, Joseph Hinson, and Emilia Hinson; and numerous in-laws, nieces, nephews, cousins, family, and friends. A funeral service will be held Saturday, January 18th at 2 pm at Cheney Funeral Chapel [1632 W 1st St Cheney, WA 99004], followed by a graveside service at Spangle cemetery. After the burial, there will be a Memorial Reception at the Spangle Service Club [165 N St Spangle, WA 99031]. In lieu of flowers, please make memorial donations to the Spangle Service Club in memory of Donald “Dusty” Rhoades.

The family of Donald Lee Rhoades created this Life Tributes page to make it easy to share your memories.