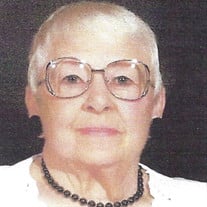 The Spirit of Dolores Marie Colomb Osterberg left her body at Badger Lake and went to Paradise on May 3, 2020. She was born at Deaconess Hospital in Spokane, WA on September 27, 1935 to William Randolph and Bessie Lorraine Jeppesen Colomb. She married Ray Eldon Osterberg on February 24, 1957 in Colfax, WA. She leaves her husband of 63 years, three children, 12 grandchildren and 22 great-grandchildren. She was predeceased by her parents, son Randy Ray and sister, Delma Lorraine Hartman of Spokane, WA. Her three children are, Kim Marie Burnell (Hank) of Zillah, WA, Mark Alex of Kennewick, WA, and Kelly Colomb of Cheney, WA. Her family lived in Dalkana, WA when she was born and she started school in Coeur d’Alene, ID before moving to Prineville, OR for the second grade. Marie graduated from Prineville’s Crook County High School in 1953. She attended a year at Brigham Young University and then graduated from Esther’s School of Beauty in Spokane. She was working as a beautician in Colax in 1956 when she met Ray. After their marriage she accompanied him on his Air Force career, living in Montana, Oregon, Germany, Texas, Okinawa (now part of Japan), California, and Germany again. Their children, Kim Maire and Randy Ray were born in Montana; Mark Alex in Oregon; and Kelly Colomb in Texas. Upon Ray’s Air Force retirement, they settled in Cheney, WA in 1976. Dolores worked at Eastern Washington University doing part-time jobs including registering students, who very much appreciated her patience and kindness, as a pleasant and courteous telephone operator. She retired in 1997. Dolores is a life-time member of The Church of Jesus Christ of Latter-day Saints and has served in many positions of leadership. She and Ray served a mission for the Church in Wisconsin from 1997 to 1999. She was also active in scouting, serving as a Cub Scout Den Mother, Boy Scout Blazer Leader, and also other positions for many years. She received the District Award of Merit in 1980. Dolores has enjoyed traveling and has been in all 50 states in the United States and 23 other countries in Europe and Asia. Including all of the smaller lesser-known countries of Europe. She has visited such exotic cities as Rome, Athens, Paris, Amsterdam, Brussels, Copenhagen, Stockholm, Oslo, Tokyo, and Hong Kong. Plus many smaller cities and towns with their famous castles, churches, art collections, traditions. Always having a desire to live near water, she and Ray purchased a small double-wide on the shores of Badger Lake south of Cheney in 1999 and moved there in 2000. She was diagnosed with Alzheimer’s Disease in 2006 and has lived and remains a beloved wife, mother, grandmother and great-grandmother, and friend to any until death took her. A Burial will be held at Dry Creek Cemetery between Troy and Dreary, ID on Friday, May 8th at 1:00 pm.

The Spirit of Dolores Marie Colomb Osterberg left her body at Badger Lake and went to Paradise on May 3, 2020. She was born at Deaconess Hospital in Spokane, WA on September 27, 1935 to William Randolph and Bessie Lorraine Jeppesen Colomb. She... View Obituary & Service Information

The family of Dolores Marie Osterberg created this Life Tributes page to make it easy to share your memories.

The Spirit of Dolores Marie Colomb Osterberg left her body at...