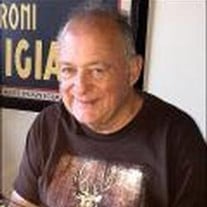 ADER, Dennis R. (Age 73) Passed away suddenly at his home Friday, July 24, 2015. Dennis is survived by his loving wife of 26 years, Joan, who loved him with all her heart; his brothers John, David, Paul (Lorraine); his sisters Pat, Judy (Larry), Lori (Dan) and Betsy; his daughter Jennifer, (Jeff); granddaughter Isabella; grandson Enzo; many nieces and nephews, and his best friend of 60 years, Danny Coe. Dennis was a beloved husband, father, brother uncle and friend to so many. Dennis was the youngest boy of eight children. Dennis was born June 25, 1942. Dennis grew up all over the mid-west until his parents finally settled in Spokane, WA. Dennis graduated from Rogers High School in 1961 and was immediately drafted by the Army and was in the 82nd Airborne Division out of Fort Bragg, North Carolina. Most recently, he was honored at his granddaughter's Veteran's Day school celebration and was touched very deeply. Dennis worked for the railroad following his service in the military when he applied for work at Pacific NW Bell. Dennis then began his career working for Pacific Northwest Bell, which later became US West, and then became Qwest. He retired from Qwest Communications after 33 years of service. Dennis loved shooting, hunting, fishing, boating and anything outdoors. Dennis became a member of the Big Game Council and was the treasurer for several years and one of the Hunter's Education instructors, as well as managing the Horn Booth. His passion for shooting gained him many awards in high school, later the military and most recently at the Spokane Rifle Club where he recently won a first place award for pistol shooting. He positively loved being a part of the Spokane Rifle Club where he became a lifetime member. He was accomplished in everything he pursued by studying endlessly and perfecting his craft whatever it was. Dennis, aka Poppy, Papa could also fix anything. He built decks, docks, boathouses, book shelves, desks and, most recently, a balance beam for his granddaughter Isabella. If you knew Dennis, you knew he would help anyone, fix anything and was the most patient and kindest person in the world. He was a wealth of information and knew something about everything. He shared his knowledge and passions freely. Helping people learn brought him great pleasure and he was able to transfer knowledge easily and in such a way that it was easily understood. Their favorite place on earth was Pend Oreille Lake. A trip to the lake usually meant a project or two or repairs to be made. Dennis always included anyone interested in these projects. But, after projects were complete, there was always time to play. Dennis will be greatly missed by everyone who knew him. He was soft spoken, witty, loving, and generous in every way. In lieu of flowers, please make donations to the Spokane Rifle Club. Visitation will be from 5-7 p.m. Tuesday, July 28, at Cheney Funeral Chapel. A funeral service will be held at 10:00 a.m. on Saturday, August 1.

ADER, Dennis R. (Age 73) Passed away suddenly at his home Friday, July 24, 2015. Dennis is survived by his loving wife of 26 years, Joan, who loved him with all her heart; his brothers John, David, Paul (Lorraine); his sisters Pat, Judy (Larry),... View Obituary & Service Information

The family of Dennis R Ader created this Life Tributes page to make it easy to share your memories.