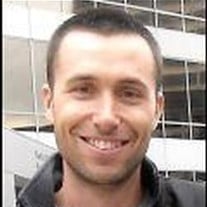 RATTRAY, Chad Michael (Age 37) In loving memory of Chad Michael Rattray, born to Candy and Terry Rattray, March 8th, 1977, risen to new life January 20, 2015. Chad had just been hired by the Spokane Transit System, passed a full physical and had a flu shot within the last seven weeks. It was to our shock that he was taken from us so quickly of an infection believing to have been from complications from the flu. Chad was an entrepreneur, running his Hot Dog stand, Cheddar Chad, on the corner of Howard and Riverside for 13 years. In doing so, he put himself through college. There he became well known as a friend and brother to everyone. Chad was always willing to give out a hand and kind words to customers as well as passers-by. He touched many lives as he lived out the "word" to love your neighbor. He attended and graduated from Northwest Christian High School, Spokane Falls Community College and this fall from Eastern Washington University with a degree in International Affairs and Cultural Anthropology. He attended St. Mark's Lutheran Church here in Spokane. He loved the Lord God with all his heart and soul. He sought God's will daily. Chad was a quiet man who did not preach the gospel, but lived it out daily so others could see Christ in him. A note that was found in his Bible read "The human soul is restless until it finds it's rest in God", by St. Augustine. Chad leaves behind his mother, Candy, brother, Todd, daughter Brooklyn Murphy and father, Terry, along with his stepmother Jennette, stepsister Jessica Asien, stepbrother Travis Brown and numerous aunts, uncles, nephews and nieces within the Spokane area. He has joined his beloved Grandma, Jessie Clark, who passed away a year ago, along with family members who had a rich inheritance as well, through Christ. Prior to traveling to Africa in 2011, Chad left us a written letter in case something happened that prohibited him from coming home. Some of what he wrote is as follows: "If something has happened to me, then that's OK, I don't mind. I'm so thankful for the people God has allowed me to know in my life. The only sadness I have is not seeing the rest of your lives. You were all so kind to me. Thank you for sharing your life with me. If I didn't do a good enough job of showing how much I loved you, saying it now wouldn't change it. I promise I loved you so much. Yours, Chado". Chad's desire and passion was to return to Africa to serve those that were struggling, as well as to continue to be a brother to the African community of brothers and sisters in Christ, both here and abroad in Africa and here in Spokane. To continue his work, there has been a memorial set up through the Spokane Teachers Credit Union. "Chad Rattray's Lighthouse Outreach Memorial Fund"; donations can be made at any branch. A memorial service is scheduled for Friday, January 30th at 11:00 a.m. at First Presbyterian Church in Spokane.

The family of Chad Michael Rattray created this Life Tributes page to make it easy to share your memories.