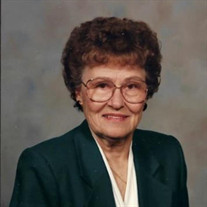 Carolyn Esther (Polenske) Giles, 98, passed away peacefully at the South Hill Village in Spokane Washington on December 12th, 2021, where she resided for the last eight years. She was born in Reardan, Washington on October 26, 1923, to Oscar and Esther (Weber) Polenske. She was the oldest of three sisters, joined by Inez (Stack), and June (Wollweber). They grew up on the family wheat farm outside of Edwall, WA. She attended Edwall grade school and high school, graduating in 1941. In 1944 Carolyn received a BA in Education from Eastern Washington College of Education, now EWU. This is where she met her future husband, Ramond (Ray) Giles. After graduating, she taught second grade in Renton and Spokane. After Ray returned from WWII where he served as a P-38 pilot, they were married in Spokane on July 18, 1947, and lived in Cheney. Ray taught at EWU while Carolyn taught at the Campus School. In 1949 they moved to Sea Cliff, New York on Long Island, while Ray worked on a Master's degree, and Carolyn taught second grade. Carolyn returned home from New York to live with her parents in February, to await the arrival of Robin Rae, born on April 19, 1950. Ray finished his degree in New York, and came home to Cheney, which became their forever home. The family grew with the arrival of Barry on December 29, 1951, followed exactly three years later when Laurie Ann was born in 1954. Carolyn was a very active member of Beta Sigma Phi, PEO, and worked several years on the local election board. She taught Sunday School, was a Camp Fire leader, and would be the first to take food to a family in need. She loved to travel, and with Ray, they went many times to Hawaii, and Tempe during the winter. They also traveled to Australia, New Zealand, Fiji, Canada, Mexico, and embarked on a Caribbean Cruise for their 50th anniversary. With a cabin at Williams Lake, Carolyn loved to entertain guests. The family enjoyed many fun summer days swimming, skiing, boating, and sunning. Carolyn was preceded in death by both parents, Ray, her husband of 73 years, and her two sisters. She is survived by her three children, Robin (Dennis) Dvorak, Barry (Amina) Giles, and Laurie (Randy) Suess, 6 grandchildren, 10 great-grandchildren, and numerous cousins. She will be laid to rest beside Ray, during a private family burial at the Washington State Veteran’s Cemetery. A public Memorial Service to honor her life will be held at 2:00 p.m on Monday, December 20, at Cheney Funeral Chapel.

Carolyn Esther (Polenske) Giles, 98, passed away peacefully at the South Hill Village in Spokane Washington on December 12th, 2021, where she resided for the last eight years. She was born in Reardan, Washington on October 26, 1923, to Oscar... View Obituary & Service Information

The family of Carolyn Esther Giles created this Life Tributes page to make it easy to share your memories.