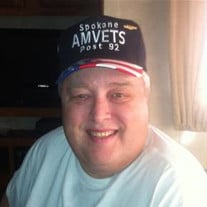 Billy Joe Cropper Jr. was the eldest of two children born to Billy J. Cropper Sr. and Judith L. Cropper on July 18, 1960 in Wallace, Idaho. The family lived in the towns of Mullan, Wallace, and then Silverton, Idaho. Billy went to Mullan Elementary, Wallace Elementary and graduated from Wallace High School in 1978. After high school, Billy enlisted in the United States Navy and served from November 1978-November 1982 as a submariner. He later met his wife of 25 years, Gail, in Wallace, Idaho. They married January 12, 1991 at the United Methodist Church in Wallace, Idaho. The two later moved to Spokane, where they had two daughters. Billy worked at the United States Postal Service as a mail handler and later, medically retired due to a service-connected disability. Throughout his life, Billy was involved in coaching football, volunteering with the Special Olympics, and was a lifetime member of the DAV Chapter #6 and AMVETS #92, both in Spokane. Billy worked diligently to help promote and fundraise to get vans for the DAV to transport our nation’s military veterans to and from important appointments. Through the DAV van fund, they were able to purchase two new vans and are currently trying to raise money for a third. He was an avid fan of the Green Bay Packers football team since he was six years old—GO PACK GO! He loved to dance, sing and spend many invaluable moments with his entire family. He loved his family more than anything else in the world and made his family a priority. Billy was very proud of each member’s many accomplishments. He was to be expecting his first grandchild this summer. Many of his friends and family considered him to be a gentle giant with a huge heart, great smile, and an infectious laugh. Preceding him in death is his beloved step-son, Jason; grandparents, Pete and Bertha Cropper and Jess and Edna Jones. Billy is survived by his loving wife, Gail L. Thor Cropper of Spokane; daughters, Elizabeth L. (Tyler) Tinney and Rebecca J. Cropper (fiancé, Royal Horseman), both of Spokane; Parents, Billy and Judith Cropper, of Silverton, Idaho; Brother, Pete (Carol) Cropper of Spokane and their sons, Sam and Steven; Mother-in-law, Sandra Thor, of Entiat; Numerous in-laws, nieces, nephews, cousins and countless friends. Donations of flowers are asked to be sent to the Cheney Funeral Chapel. If you would like to send any donations in Billy’s name, please send to the DAV Spokane Chapter #6 Van Fund or any other military service organization. Services are to be held on Friday, February 12, 2016 at the Washington State Veterans Cemetery in Medical Lake, Washington beginning at 11:15 a.m. followed by a reception at the Airway Heights VFW #3386. A Celebration of Life will be held sometime in May at the Wallace Elks Lodge #331.

The family of Billy Joe Cropper, Jr. created this Life Tributes page to make it easy to share your memories.

Billy Joe Cropper Jr. was the eldest of two children born to...