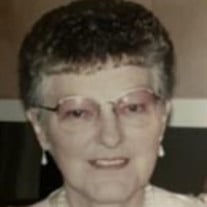 Beverly (Bev) J. (Southwell) Primmer passed away on March 30, 2022, at Sacred Heart Hospital surrounded by family. Born to William and Lola (Sparling) Southwell on October 22, 1935. She has one brother Edward. Bev graduated from Rockford High School in 1953. Bev married (John) Stanley Primmer on December 4, 1955. They have six children Tracy (Jan), Jeff, Randy (Patty), Doug, Cheryl (John) Johnson, and Jody (Dave) Cornwall. She was blessed with eight grandchildren and six great-grandchildren. She was preceded in death by her parents and grandson Michael. Bev worked at the Good Samaritan Center in Fairfield for 20 plus years. She was involved in her community having lived in the Rockford area her entire life. She was a member of Eastern Star, Rockford Women's Club, Garden Club, Birthday Club, and the Methodist Church. Funeral Services will be held on April 9, 2022, at 11:00 AM, at the Fairfield Community Center, 304 E. Main St., Fairfield, WA. Memorial donations may be made to Spokane Co FPD #11 EMS, Rockford Cemetery, or the charity of your choice.

The family of Beverly J Primmer created this Life Tributes page to make it easy to share your memories.