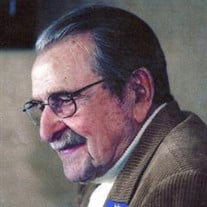 Bert H. Conrath (age 92) Of Cheney, Washington passed away September 4, 2014 in Spokane. Bert was born June 30, 1922 in Tokio, Washington to Charles and Anna (Yager) Conrath and was a graduate of Sprague High School, class of 1940. Bert served in the Army Air Corp. during WWII as a mechanic and engineer on B25 Bombers. After the war he returned to Cheney and was married to Patsy Clute in 1948. Bert worked for Ratcliff Ford in Cheney for 17 yrs, 5 yrs at Cheney Motor as a partner and 18 yrs at Eastern Washington University in the motor pool. He also served 36 yrs as a volunteer fireman in Cheney. In his retirement Bert continued to work on anything with a motor in his well equipped shop. He is survived by his wife; Pat Conrath at the home in Cheney, WA. Children; Becky Ann Marsh (John) of Cheney WA, Philip Conrath of Rocky Point, ID and William Allen Conrath (Vara Lyn) of Cheney, WA. Nine grandchildren ; Scott, Gregg, Shanna, Tom, Chris, Matt, Meghan, Mark, and Erin. Nineteen great-grandchildren. He is preceded in death by his son, Errington, at birth, his parents and his brothers; Alvin and Harvey. A memorial service will be held at 11:00 a.m. on Friday, September 12, at Emmanuel Lutheran Church in Cheney followed by a reception at the church

The family of Bert H Conrath created this Life Tributes page to make it easy to share your memories.