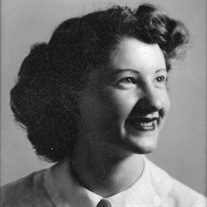 Barbara Ruth Brown of Rosalia, Washington, known as “Ruth”, passed away on May 8, 2021, at the age of 89 years old. She ran out of strength to recover from a fall in her home. The daughter of Marvin and Agnes West, she was born January 24, 1932, at her grandparents Herron’s place outside of St. John, WA. Her grandmother and the local doctor delivered her. Ruth was the seventh of eight children. She attended schools at St. John, Pinehurst Idaho, Rockford, and then finally Colville. She graduated from Colville High School in 1950. In her first years at Colville, she had to run/walk eight miles round trip to catch the bus. Later the bus route changed and she only got in six miles. She attributed the exercise to her long life. The exercise probably also helped her beautiful soprano voice, which was strong enough to carry from the house to the milking barn. As a substitute for a blind date while she was attending her freshman year at Eastern Washington College, Ruth was fortunate to meet her future husband Roy Brown Jr. of Rosalia. Though as she declared “he was the lucky one.” They married on November 29, 1951. They settled in Rosalia, WA after Roy served on a Navy troop supply ship during the Korean conflict. Ruth’s singing continued at church and weddings and in the kitchen through the raising of seven children. (We too were the lucky ones.) Once her children were older she worked as a bookkeeper. Roy passed away in January 2007. Our mother was a happy and content woman. Babies made her even happier. She could make the fussiest baby smile. She liked her own babies, babies of the next generations, and any baby she saw. Her children and their spouses are; Timothy and Kathleen, Denise Brown, Christopher (deceased) and Candie, Gregory, Teresa, and Roger Woodworth, Patrick and Tami, and Daniel and Michele. She had seventeen grandchildren and sixteen (so far) great-grandchildren. Ruth was the last of her family that included brothers; Millard, Howard, Lyle, Ronald, and Bruce, and sisters; Guinevere Els and Mildred Draper. She is survived by sisters-in-law Gerry West, Shirley West Keifel, and Caron West. Ruth will be buried next to her husband in the Holy Rosary Cemetery south of Rosalia at 11:00 am on Saturday, May 15, 2021. From the south Rosalia exit off Highway 195, go south on Highway 271, turn left on CW Hughes Road, which will turn into LD Johnson road. Watch for the cemetery entrance on the right. The family will attend a funeral service at Holy Rosary Catholic Church at 9:30 am in Rosalia before joining more relatives and friends at the cemetery. Many thanks to the Rosalia Fire Department for the ambulance service for Roy and Ruth in their later years. Keep it up, the next generation will need you.

Barbara Ruth Brown of Rosalia, Washington, known as &#8220;Ruth&#8221;, passed away on May 8, 2021, at the age of 89 years old. She ran out of strength to recover from a fall in her home. The daughter of Marvin and Agnes West, she was born... View Obituary & Service Information

The family of Barbara Ruth Browm created this Life Tributes page to make it easy to share your memories.